The new Antiquity has a paper by Simon Banton, Mark Bowden, Tim Daw, Damian Grady and Sharon Soutar. All work for English Heritage: Bowden, Grady and Soutar are based at the Swindon centre, and Banton and Daw at Stonehenge. Their study began in last year’s exceptionally dry summer, when Tim Daw realised patches of dead grass at the site matched the location of some missing stones. Simon Banton agreed. They contacted their archaeological colleagues in Swindon, and set out to record the marks.

The story followed by the press is about the big sarsen circle (the BBC has a good report with a couple of key illustrations from the Antiquity paper, for which you need to be a subscriber to read). This says that the parchmarks, on the west side of the site where there is the longest run of missing stones, definitively prove that there were once stones there, and thus that the circle really was a circle – and not, as some archaeologists have been arguing, an unclosed arc.

Readers of British Archaeology will have learnt about this a year ago, when I reported the news – and the startling point that had the site hose been a little longer, the grass there would have been watered, and the marks might never have been seen. I was pretty confident that this was indeed evidence that the circle had been complete, as you can read in the news text copied at the end of this blog. Ironically, given the press’s new shared confidence, the Antiquity team say that “the evidence is still inconclusive”.

“While the discovery of parchmarks corresponding to stone holes 17 and 18 does have a bearing on this question”, they write, “it does not answer some of the other difficulties listed above [eg “lintels are missing from positions where it would have been difficult (and illogical) to remove them”] and the presence of a stone hole does not of itself prove that a stone ever stood in it.”

Leaving that aside (I remain on the completist wing), the new paper brings much more than this. Dave Field (also English Heritage) noticed further marks in the grass that corresponded to the Y and Z Holes (both excavated and unexcavated) – and “others [which] apparently formed a third, concentric ring between them”. This is entirely new, and potentially of huge significance in our flailing attempts to understand these pits beyond the stones. “Until the new features at Stonehenge can be corroborated”, they conclude, “:and in the absence of dating evidence this remains speculative: but if [the parchmarks between the Y and Z Holes] could be proved to be postholes of mid third millennium BC date they would offer firm evidence for [Alex] Gibson’s proposal [of multi-circuit timber post settings at Stonehenge].” 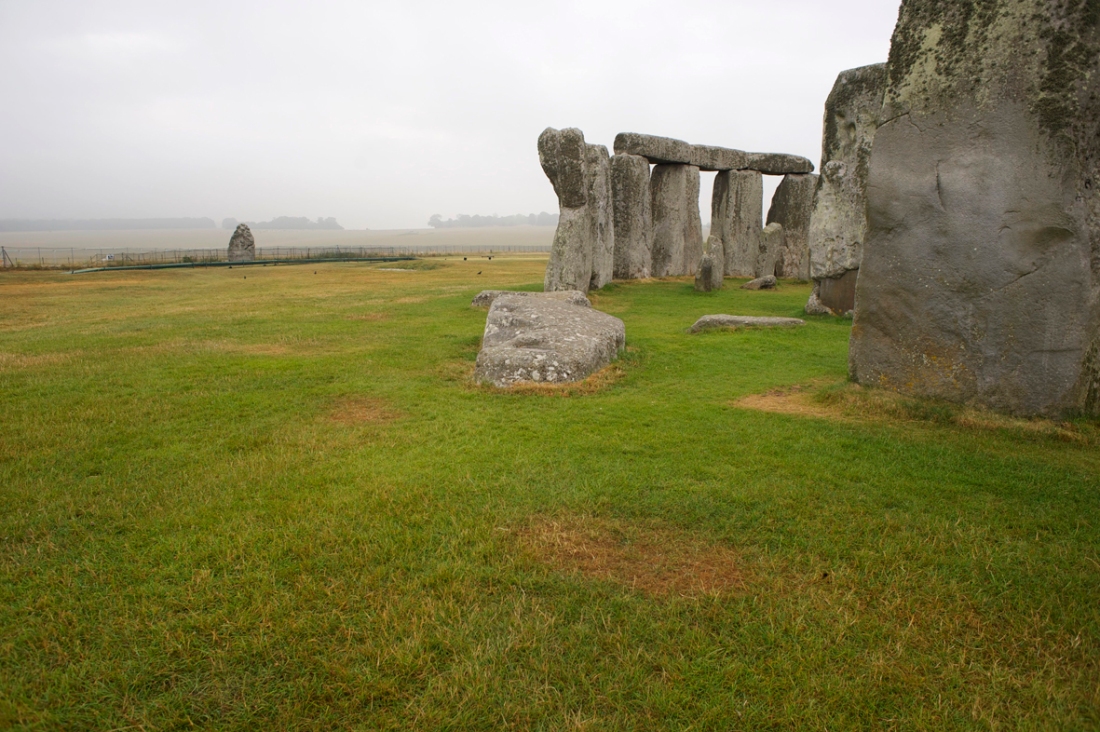 “A number of more diffuse marks were noted, at approximately 5m intervals, on the inner flank of the southern and eastern sections of the enclosure bank, three of them apparently corresponding with holes F, G and H… This second set of marks was photographed from the air (by DG) on 26 July and from a lower level by Adam Stanford on 27 July… but unfortunately it was not possible to survey them until the following week when they were already fading rapidly (and some had indeed disappeared).”

As the Antiquity team say (thank you!), this new evidence offers “some support for Pitts’ suggestion of an outer ring of stones between the Aubrey holes and the enclosure bank. This was based on antiquarian evidence, the presence of holes F, G and H, and the Station Stones (Pitts 1981). However, again, more research is needed to clarify this issue.”

This is a wonderful piece of serendipitous research, highly productive and promptly published. If anyone remained unconvinced that new, targeted excavation at Stonehenge is needed, surely any doubts must now be dispelled?

This is the Antiquity plan, slightly adapted: colouring the Y and Z Hole rings with a pink band makes it easier to see the newly revealed pits in between. We have no firm evdience for when any of these orange “pits” were dug, or what they were for.

Generations of guidebooks and reconstructions for television films have shown an original Stonehenge as a complete megalithic circle. Yet since at least the 18th century archaeologists have debated whether that was so. The idea that there never was a full ring of sarsens had gained ground in recent years. New evidence resulting from the hot, dry weather seems to have clinched the case for a complete circle. Had English Heritage provided its site staff with a longer hosepipe, it is evidence that may never have been seen.

Stonehenge today looks much as it did when first recorded in the late middle ages. Approached from the north-east, it has the appearance of a ring of massive, closely spaced pillars under a continuous ring of lintels. From the south-west, however, most of the stones in the apparent ring are seen to be missing, or fallen and broken.

In 1655 the architect Inigo Jones, inspired by ancient Roman buildings, imagined Stonehenge as a symmetric monument with a complete lintelled circle. Architect John Wood’s rival theory, based on the first accurate survey of the stones and published in 1747, was that “the whole Work was never compleat”. Jones’s version became the popular view, though Wood’s has always had its followers, among them Egyptologist Flinders Petrie, who surveyed the site in 1880. In 1995 geophysical survey found no trace of four stones. A study by English Heritage in 2010 saw an “increasingly likely possibility that the outer stone structure was not completed as a circle”.

A new case for a full ring emerged last year with a 3d laser survey of the stones by English Heritage (feature Nov/Dec 2012/127). Signs for massive damage to fallen stones were taken to argue that many could have been removed entirely. Details of stone finish and shape suggested that Stonehenge, “an architecturally complex structure, and not a regular circle”, was designed to be seen from the north-east and the inside; stones to the south-west were smaller and less well finished. Clues to missing stones – geophysical and excavation evidence, fallen fragments, and tenons on adjacent stones implying the existence of former lintels – left only one megalith for which no reasonable case could be found: number 17.

In July zones of grass parched brown in the rare heat were noticed by Stonehenge steward Tim Daw where buried ancient pits (Y and Z Holes) are known to exist. There were other parch marks on the sites of missing stones on the south-west side, including a run between 17 and 20 – proof to close the complete circle. A water sprinkler had kept much of the grass green, but the hose did not reach that far.

Mark Bowden, an archaeologist in English Heritage’s Assessment Team (West), said there is still a case that the circle may have been incomplete. It seems likely, however, that most archaeologists will now accept a Jones-Wood compromise: complete, but a bit rough round the back.

11 thoughts on “At last: a Stonehenge story that is exactly what it says”