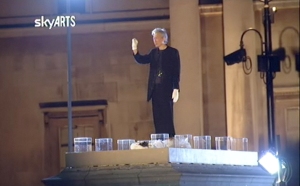 At 1–2am on July 29 2009, the empty plinth in Trafalgar Square had something amazing on it: 10 pieces of stone. The plinth itself was carved from Aberdeen granite in the 19th century, but the stones on top were varied – dolerite, flint, limestone and sandstone. Between them they represented the entire span of humanity as then known in the British Isles – 700,000 years! They were all original artefacts which I chose for key moments in the story. It began with a flint flake from Pakefield, and via, amongst others, a beautiful handaxe from Boxgrove (500,000 years ago), a piece of Stonehenge (3000BC) and part of a block from Hadrian’s Wall (AD122), the people in this story were present in a few of the things they made. And I was there too, curating this extraordinary collection.

Each stone has a catalogue entry in 10 separate posts, which you can read by clicking here – Plinth box 1 to 10.

You can watch the show by clicking on the image above. I was interviewed for The World Today on the BBC World Service (in the square minutes before I went up, courtesy of a nice man who arrived on his bike with a functioning recorder just in time) and my local radio at BBC Wiltshire.

The Council for British Archaeology held a vote for the most popular piece of stone, which, perhaps because many of the voters were probably archaeologists, turned out not to be Stonehenge or Hadrian’s Wall but the flint from the bed of the North Sea.

Many thanks to all those who helped make this possible – the people and museums who lent me their objects (listed in the catalogue), the people who came to see me and especially my family for putting up with it all. And the One & Other project itself, and, not least, the people of Britain.