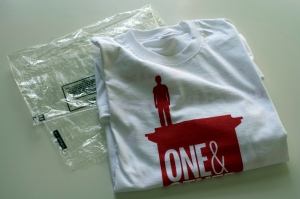 So it all comes to an end. The weather was perfect – no rain, no wind – and the acrylic boxes sparkled like jewels in the floodlights. I got the ten stones out and back in time, I talked about them a bit while I was doing this and the catalogue posts went live on the website like clockwork. It was only an hour, but for a brief moment within that short time there was a unique exhibition, in a very public place, made by all the people of Britain. And as I left, they gave me a T-shirt.

The most surprising thing about being on the Plinth was seeing a little of what goes on behind the scenes – which I was forbidden to photo (…and the World Service interview would have bombed if a producer hadn’t circumvented the One & Other PR system). The relentless coming and going of plinthers, with the staff committed to ensuring that there is always someone there, 24 hours a day no matter what, reminded me of working in a busy restaurant: the customers keep coming, every one different, every one deserving to be greeted as if they were the only one, and it never, ever, lets up.

To mount this must have been – must be – a logistical challenge that exceeds that of almost any artwork. What is impressive is that not only did the show start running well and on schedule, but it’s got better. Just as plinthers are learning from their predecessors (thank you One & Other for the easily-searched and continuous web archive), the website has improved. And like any good production, the process itself is well hidden; it just seems to run itself.

Which is perhaps what critics think it does. As I write, nearly 700 people have been through the commissioning and preparation process and onto the plinth. That’s 700 people that any journalist could talk to. If they can’t find anyone, the One & Other PR people will help. They divide media inquiries into “popular” stuff like TV news and magazines, and more “serious” art interests (I may have got the precise wording wrong, at nearly 1am I was tired and had other things on my mind, but you get the gist). And what do we read about?

With some good exceptions (such as Charlotte Higgins in the Guardian – who was largely dismissed in web comments that were childishly rude and patronising) we get little interesting analysis of the work, what lies behind it, its impact or its implications for art and society – all of them powerful and fascinating issues. What about the Wellcome Trust’s documentation? What about the psychology of plinthers’ aspirations and the effect on them of being up there, just for one hour? What about the mechanics of it (see above)? The sheer vision of this endless stream of performing humanity without direction or purpose? Right now, about a third into the live programme, what we get is Bryan Appleyard – a writer I admire –  dismissing One & Other (in a feature that is not about the art) as “just one more insult to [Trafalgar] Square”.

Something extraordinary is taking place, now, in the centre of London, in what happen to be unusual times. Maybe it needs to end before people really start to see what it is.

One thought on “Got the shirt”