Yesterday I walked in the landscape around Stonehenge.

In a recent short video headed The Stonehenge Tunnel Begins, Tom Holland stands on Bush Barrow, near Stonehenge and one of the country’s iconic prehistoric monuments, and addresses the camera.

He describes “vans and lorries employed by the Highways Agency who are testing out the ground for what is planned to be a four-lane road tunnel.”

We see barrows – bronze age burial mounds – on Normanton Down, and Stonehenge in the distance. The only noise is wind in the grass.

“All this landscape will be seriously compromised,” says Holland. “The sense of incipient desecration is completely devastating.”

I too care about this landscape. I can be as emotive about it as the best. But I also care about “truth”. Tom Holland’s video, doubtless expressing passionately held and well-meant views, is manipulative and misleading.

Between where he stands and Stonehenge is a very busy road. The film is shot in such a way that we cannot see or hear it – we are vaguely aware of some soft focus vehicles in the distance apparently driving over downland. The proposed road tunnel – it remains a proposal under discussion, work on it has not begun – would not be visible from Stonehenge, or from Bush barrow. The video presents an unbalanced view on an important issue that deserves better.

Not wishing to add more than necessary to what is already out there on this subject, I want to show some pictures, all taken within the past 12 months – mostly yesterday. This is the reality of the Stonehenge world heritage site. 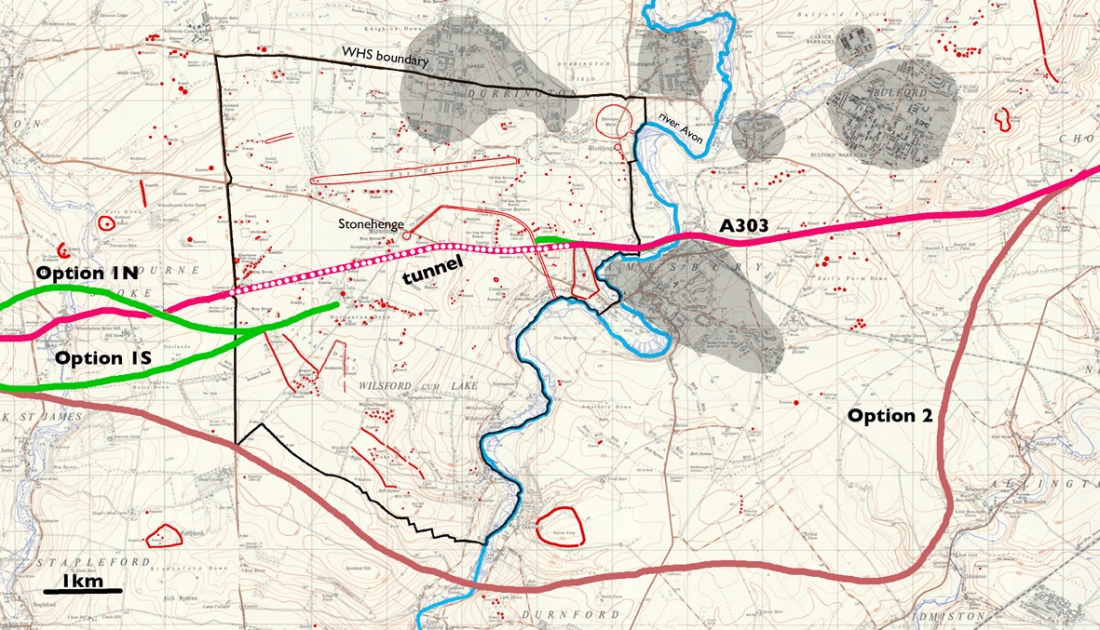 The Highways Agency recently concluded a public consultation about proposed alterations to the A303 road that passes Stonehenge. HA favours a tunnel past Stonehenge slightly south of the current road (above, Option 1), with open dual carriageway continuing to the west (one of the two green routes; there already is dual carriageway to the east). In the map above, the pink route is the existing A303; white spots mark that section which would be removed if either of the first options were to be adopted. Option 2 (F010) is a new road outside the world heritage site to the south and east.

Nothing has yet been announced or apparently decided, but public responses indicated four main positions:

1 Do nothing. (As I did yesterday sitting in a traffic queue).

2 Build a longer tunnel that starts and ends outside the world heritage site (supported by the Stonehenge Alliance). Option 1 in a big tunnel.

3 Move the A303 outside the world heritage site altogether, with a detour to the south (supported by a group who referred to themselves as “senior archaeologists who have carried out internationally recognised research within the Stonehenge WHS within the last ten years or more”). Option 2.

4 Support the HA proposal, but with serious reservations about the western portal that could be accommodated by changes that would almost certainly include extending the tunnel to the west (supported by the National Trust and Historic England). Option 1 with unknown revisions.

I last blogged about this subject in more detail here, and more recently summarised the state of play in the Society of Antiquaries online newsletter, Salon. My purpose here is simply to show what the roads, and the proposed southern route, look like now.

You might miss it from a lot of the presentations, but the A303 is a busy, dangerous, noisy road passing close to Stonehenge and through the centre of the world heritage site. It is there now.

These photos follow the route from east to west, starting at Amesbury. 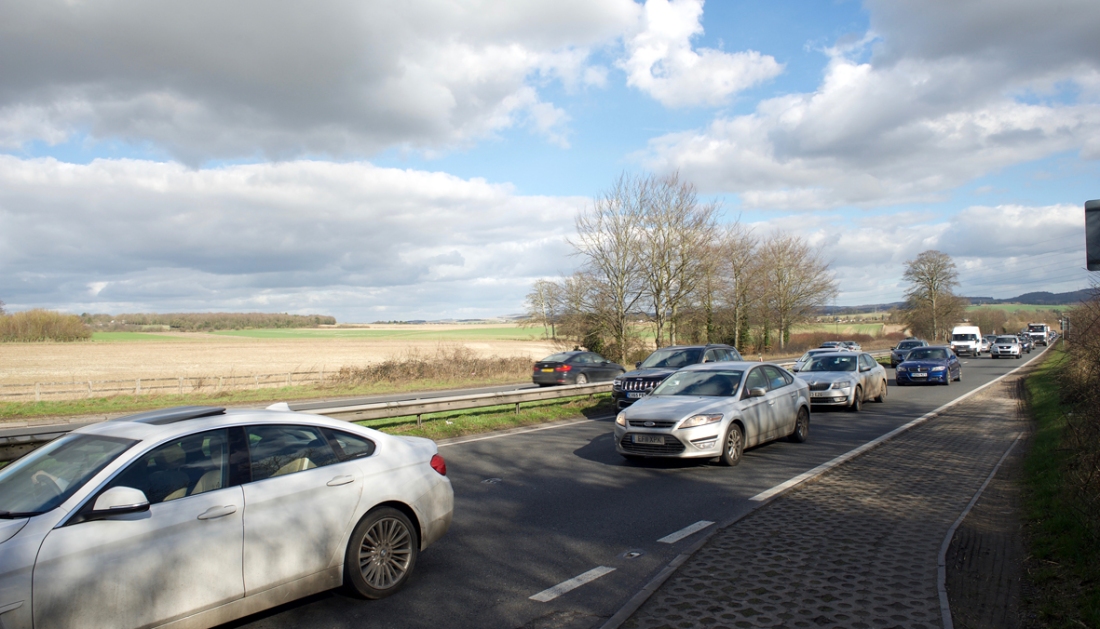 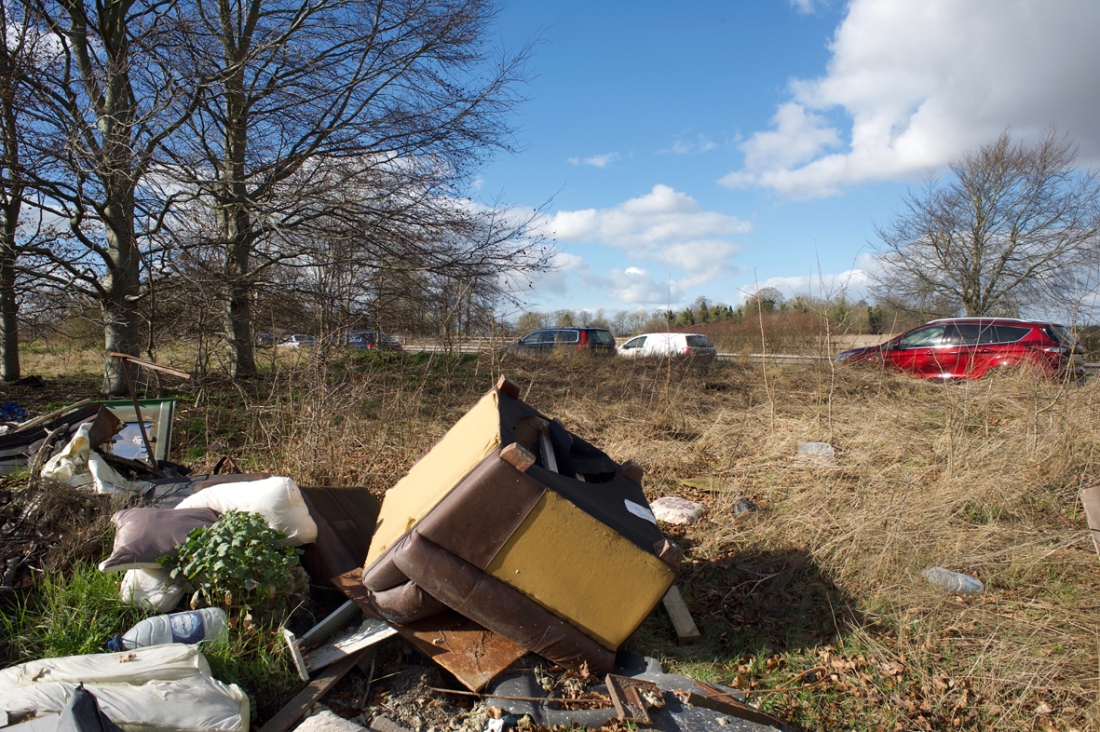 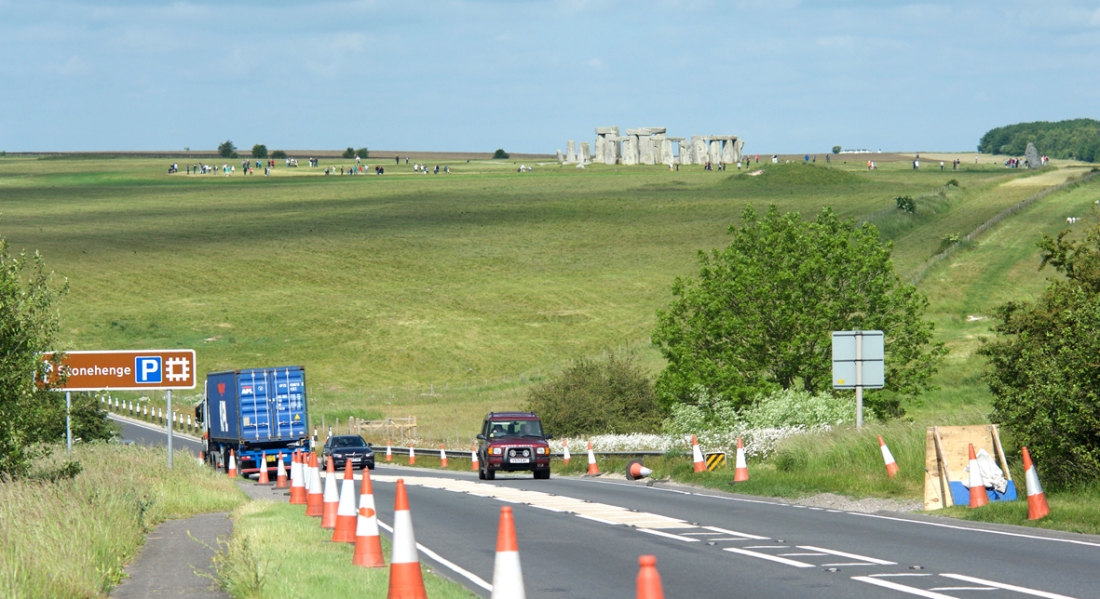 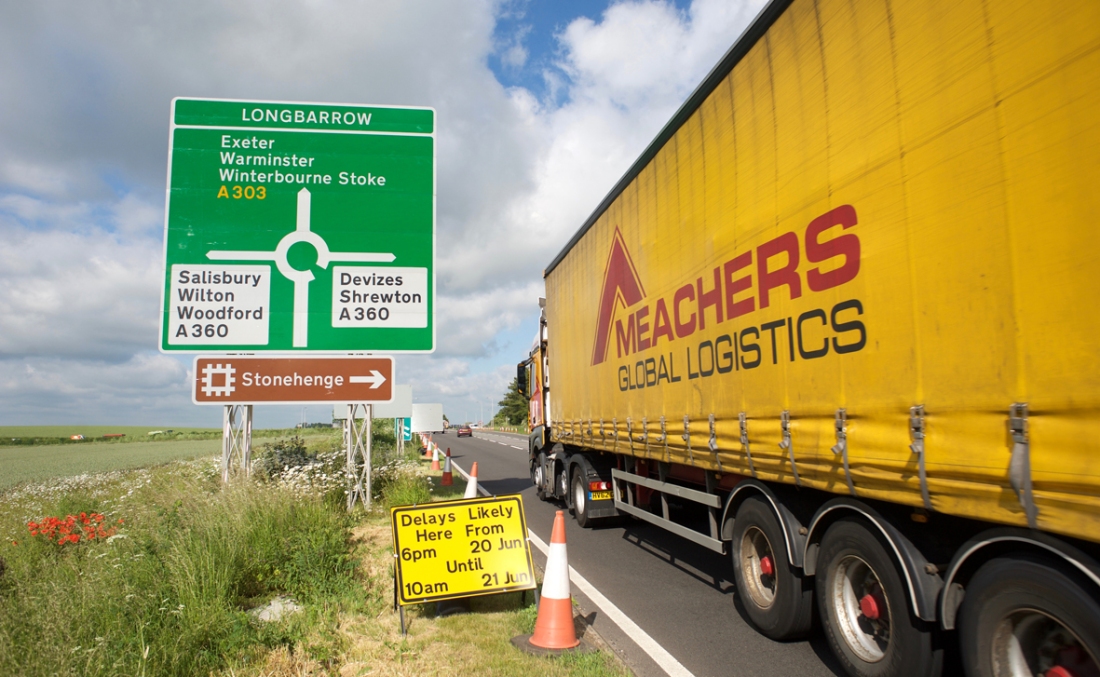 2a. A detour through Larkhill 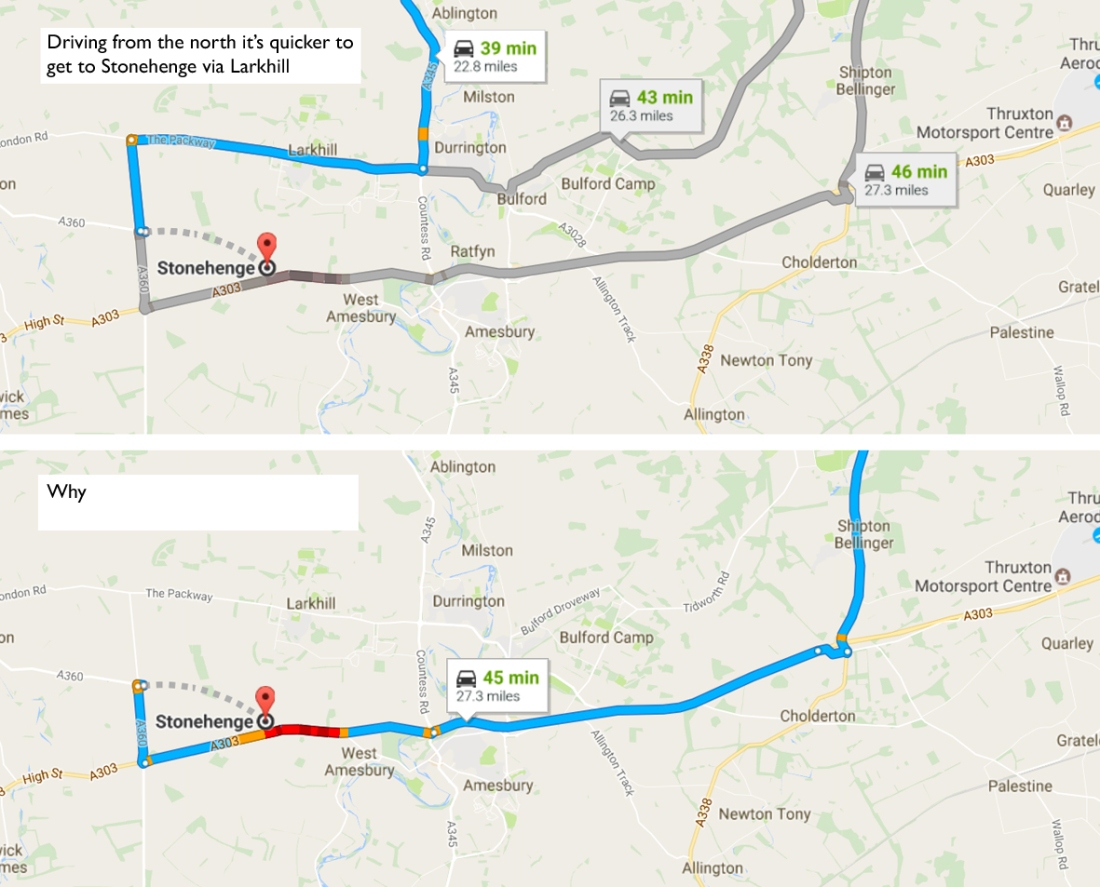 Locals and regular A303 drivers in the know sometimes avoid the jams around Stonehenge by taking a small road to the north that passes through Larkhill, a growing military community with young families, shops, schools and a church. Yesterday that road was itself jammed. 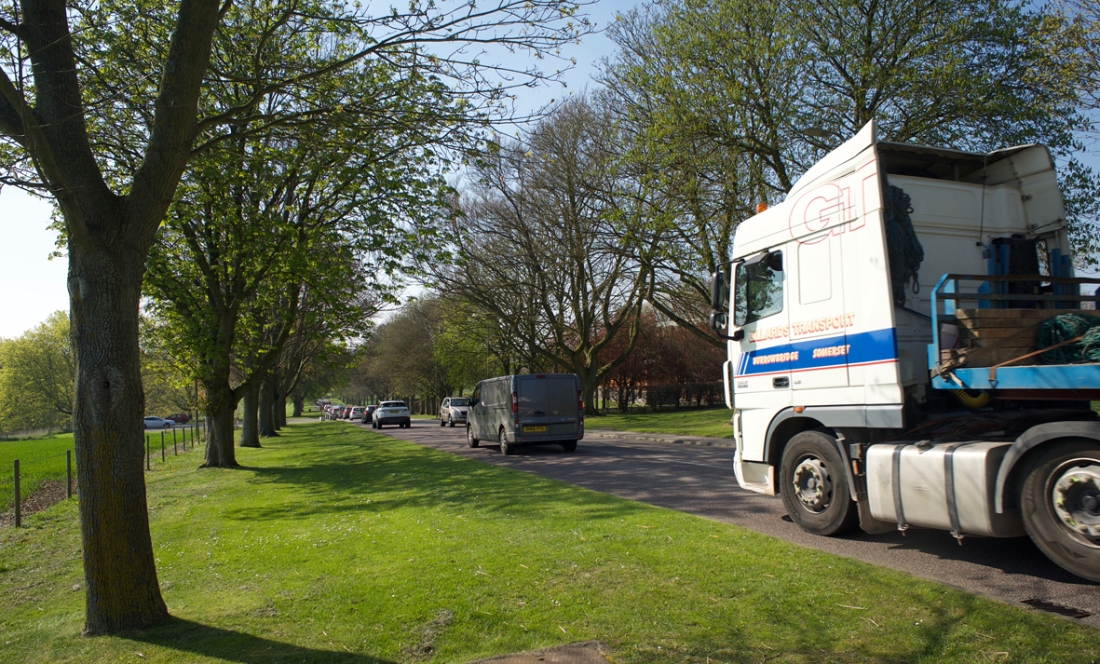 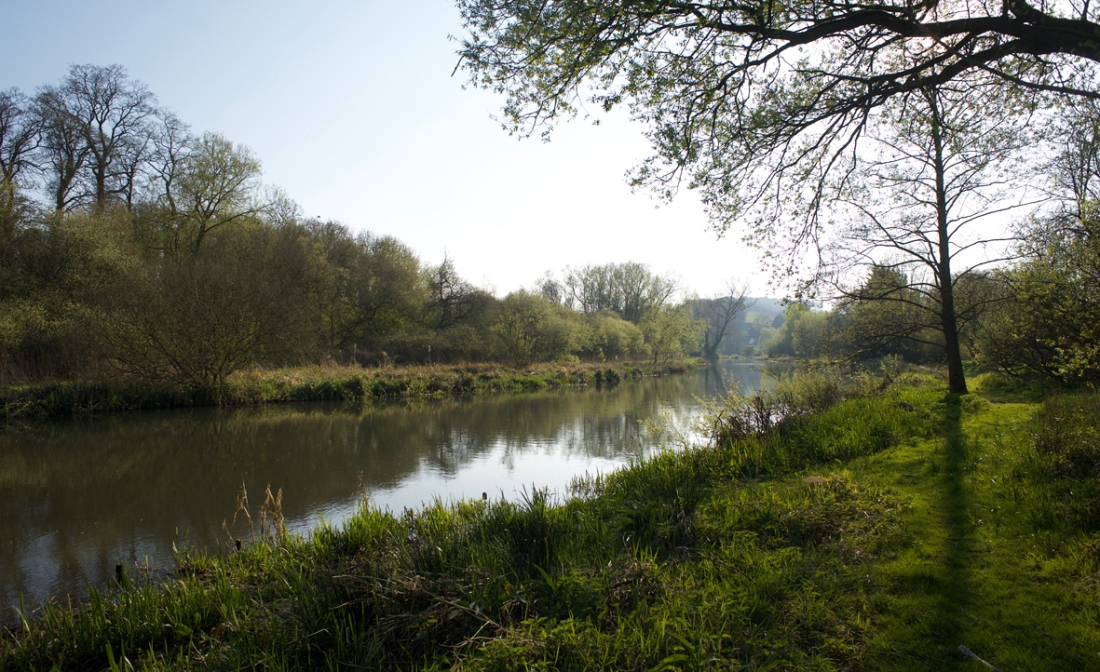 “[The Highways Agency’s] option for the surface road beyond the southern edge of the World Heritage Site (option F010) is the only one which does not have a severe impact on the WHS. Therefore it must be taken. The others have dreadful consequences for the world’s most famous archaeological site and its landscape setting.” So say (their emphases) these archaeologists:

In these photos, I follow it from the west. Out there yesterday I experienced some of the most peaceful and beautiful landscapes that Britain has to offer. As an archaeologist I also knew that I was walking close to the some of the best preserved (and least explored) prehistoric earthworks in the world heritage site, around Lake and Wilsford. Where the new dual-carriageway A303 would go, just south of the world heritage site border, has been little researched by archaeologists, if at all. We don’t know what might be there.

We start at Druid’s Lodge. The southern route would go more or less through the middle of all these photos. 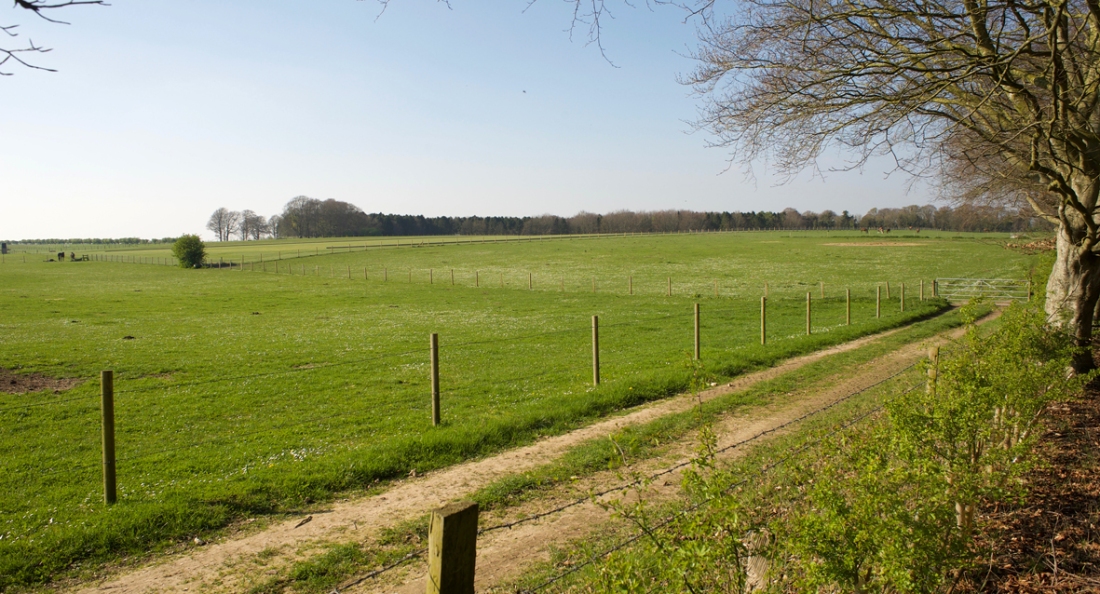 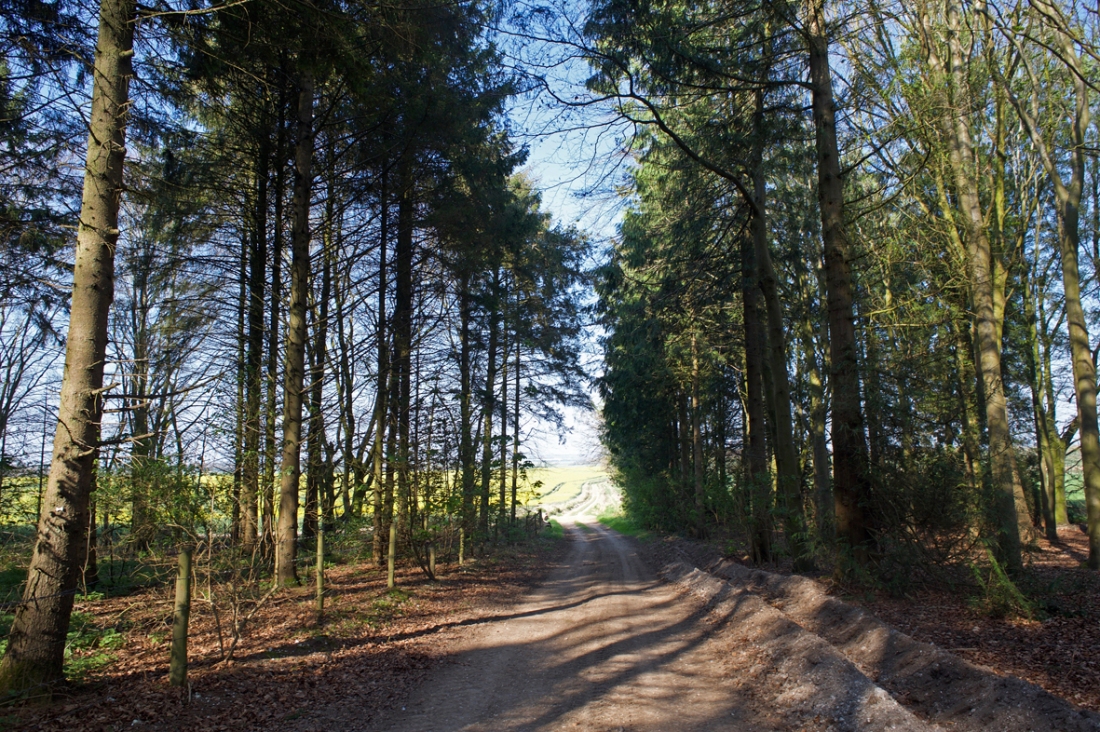 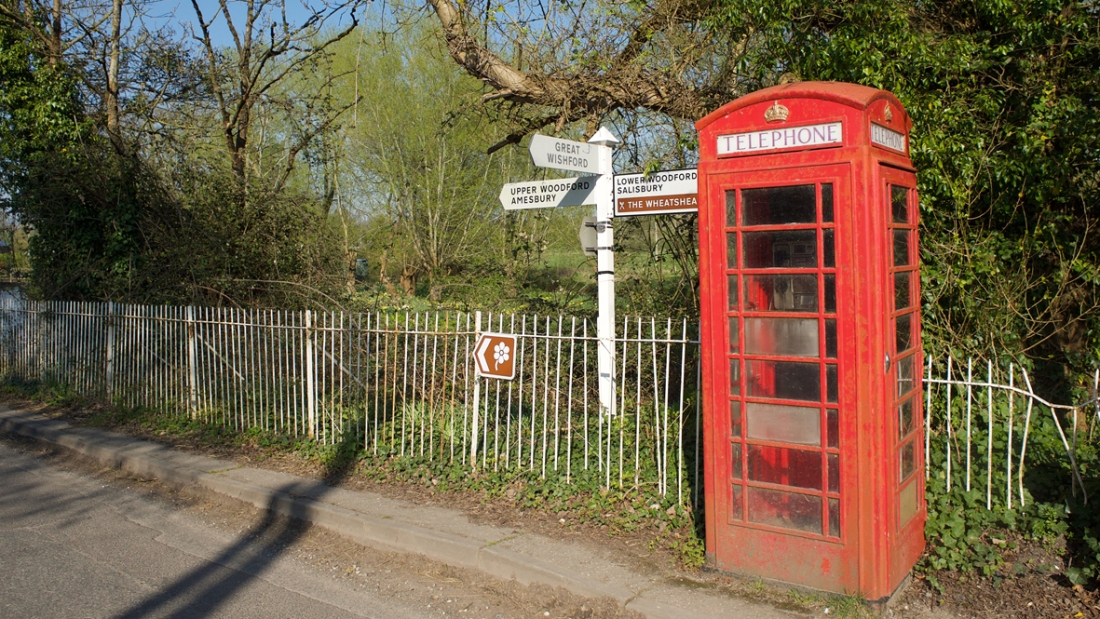 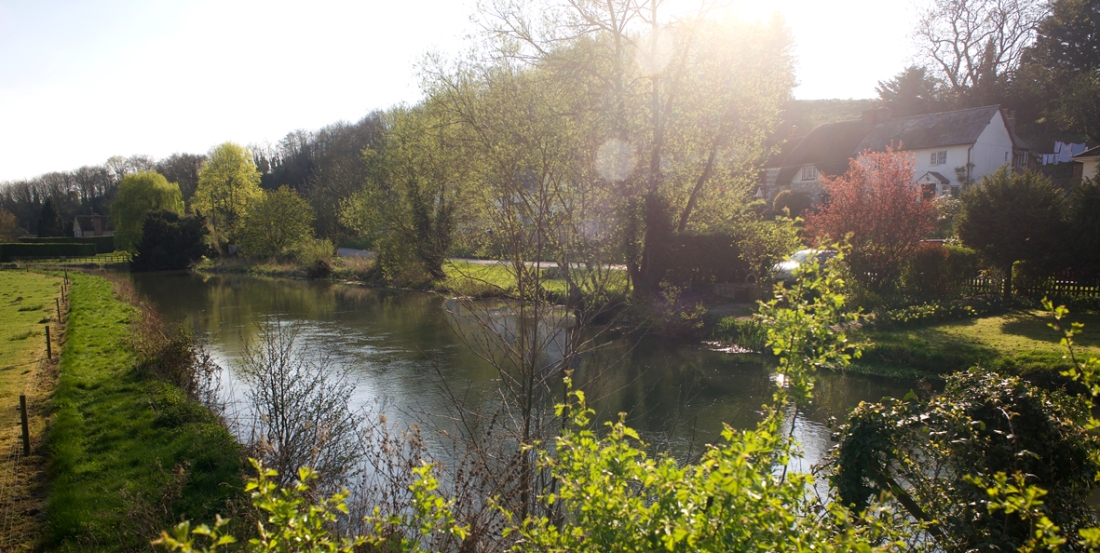 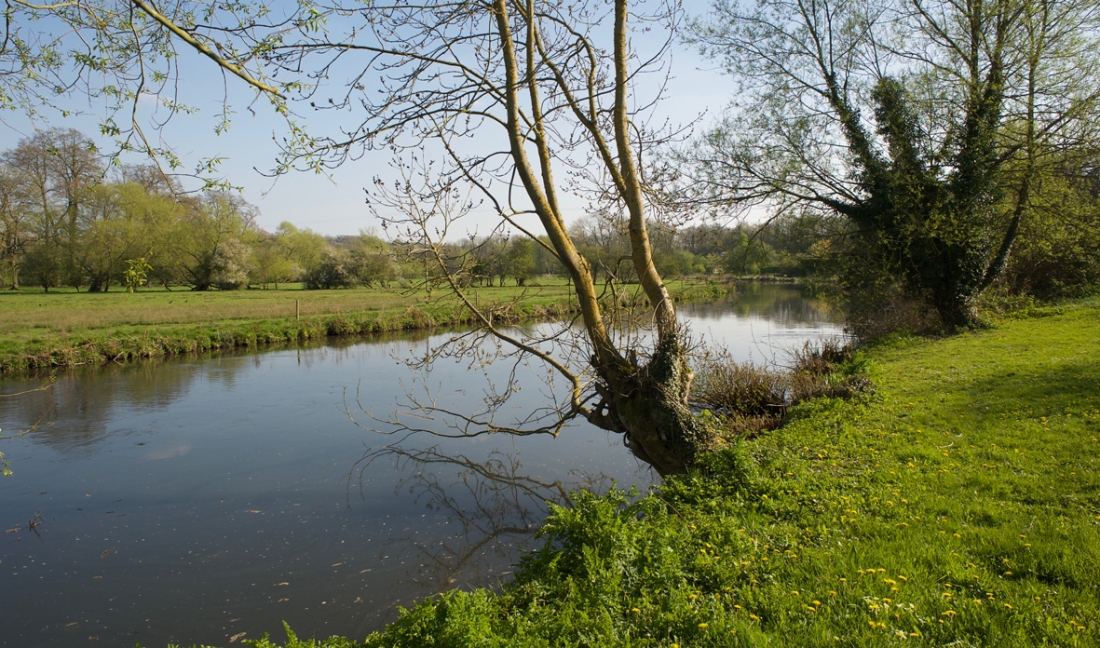 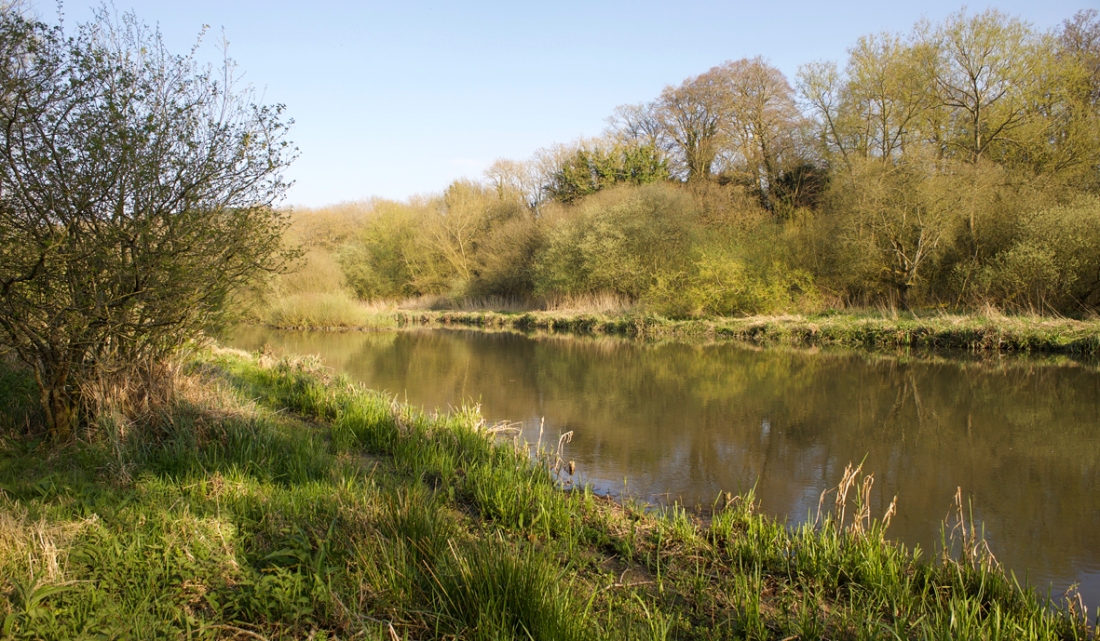 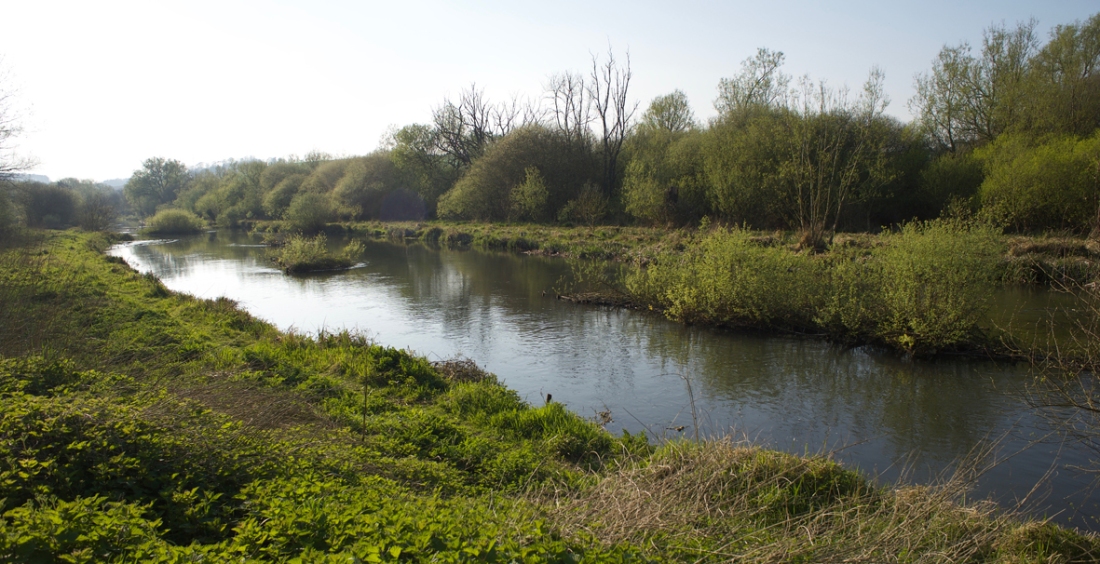 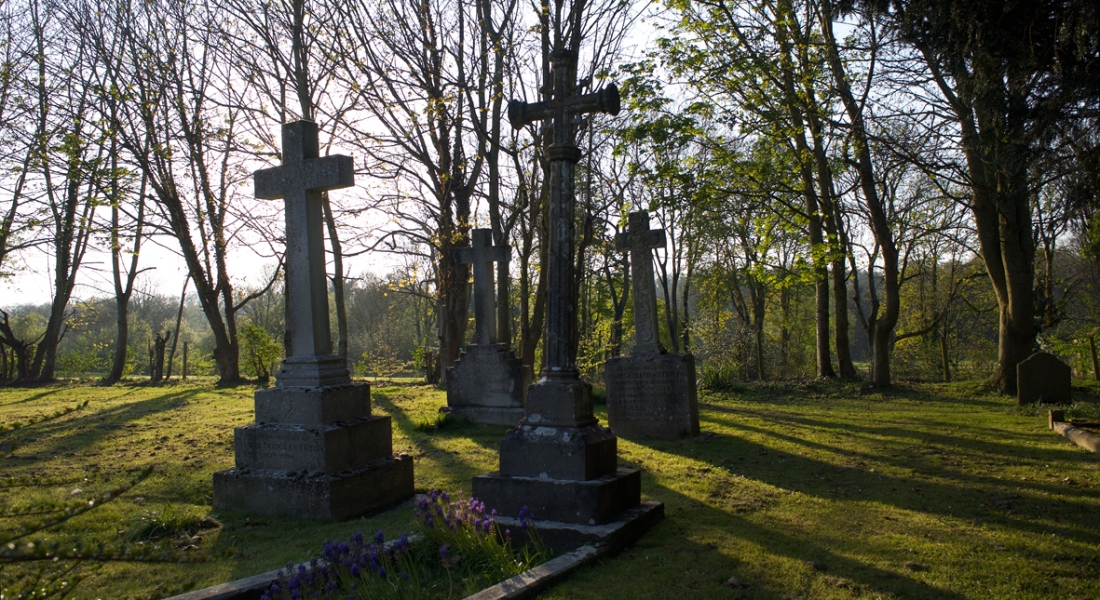 That’s as far as I got. If you look at the map above, you can see Ogbury fort outlined in red at bottom centre. We’re about halfway along the proposed southern route. Perhaps someone else would like to walk the rest with a camera.

Of course we all respect Stonehenge and its landscape, and want the best for it. Who on earth doesn’t? When you hear or see accusations that people don’t care, you know the speaker or writer is not thinking straight.

But the world heritage site border is a line on a modern map that has nothing to do with antiquity. It wasn’t there in the neolithic. It’s a reflection of what archaeologists knew about Stonehenge in the early 1980s – recent archaeological research, the historical accidents of survival, and modern history. The settlement of Amesbury is excluded because it’s a modern town, not because the place had no meaning in the neolithic. A large, significant early neolithic causewayed enclosure at Larkhill, is not included, although it may sit astride the border, because no one knew it was there until last year.

So to obsess about preserving the world heritage site on the one hand, and not to care a jot about the land outside on the other, is perverse and unthinking.

Take two extremes. We could tunnel and dual the A303 exactly on its present route (Julian Richards has more or less suggested this). Or we could build an entirely new, and much longer dual carriageway with a new bridge flying over the river Avon.

On the one hand, no cars would be driving where there are now none. No new landscape would be divided up and changed. A considerable amount of road would disappear.

On the other hand, several kilometres of entirely new road would be built across some of England’s most beautiful and peaceful rural landscape, close to quiet and idyllic riverside villages and over the river Avon, which we think (many of those archaeologists above say so) was a key part of the Stonehenge ritual world.

Why would you choose the latter, not least when you know that we have no idea what undisturbed archaeology lies on the route and would be destroyed?

And this doesn’t touch on the people who use the roads. The people who currently shortcut through Larkhill, and would be even more likely to do so, in larger numbers and through other villages as well, when faced with a long detour to the south.

Stonehenge has a long and honorable history of throwing up entertaining, eccentric and bonkers ideas. The A303 southern route belongs with aliens, ley lines and diluvial floods. And they don’t damage the countryside.

11 thoughts on “What did the world heritage site mean to people who built Stonehenge? Nothing”