They are small steps compared to crossing part of the Pacific and the whole of the Atlantic, but Hoa Hakananai’a has moved around since it arrived at the British Museum in 1869. I’ve been looking through some old copies of Antiquity, and I came across this photo. It was taken by OGS Crawford for an article by Henri Lavachery, and published in the March 1936 edition.

It’s the best photo I’ve seen of the statue in its original exhibited site, under the front colonnade of the British Museum. On the evidence of these photos, it seems to have been moved there from another outdoor site. It later went out to the ethnographic branch in Burlington Gardens, and was in the Great Court before reaching its present site.

The lantern slide in the British Museum’s Katherine Routledge collection (above) shows the statue with its back to a wall. It’s undated, but was probably taken early in the 20th century; it has pigeon droppings over the head and shoulders, suggesting it had been there for a while.

This photo with what look like Christmas trees and the museum’s totem pole, shows the statue to the right of the front entrance, facing in. The BM’s notes say the print is a copy of an original believed to be in the British Library, and it has a handwritten note saying it was taken in about 1935. The trees, apparently, are “Bay trees introduced by Director Sir George Hill”.

We can see the trees in Crawford’s photo, confirming it was taken around the same time (Hill was director of the museum 1931–36). Taken together, these two show it was standing at the top of the steps, between the two pillars on the east side of the entrance, as below: 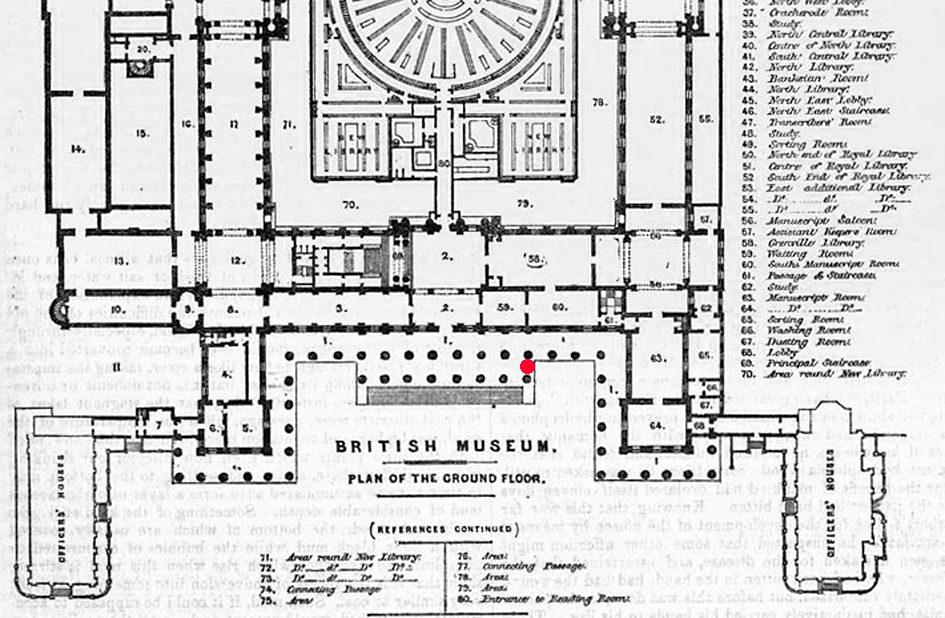