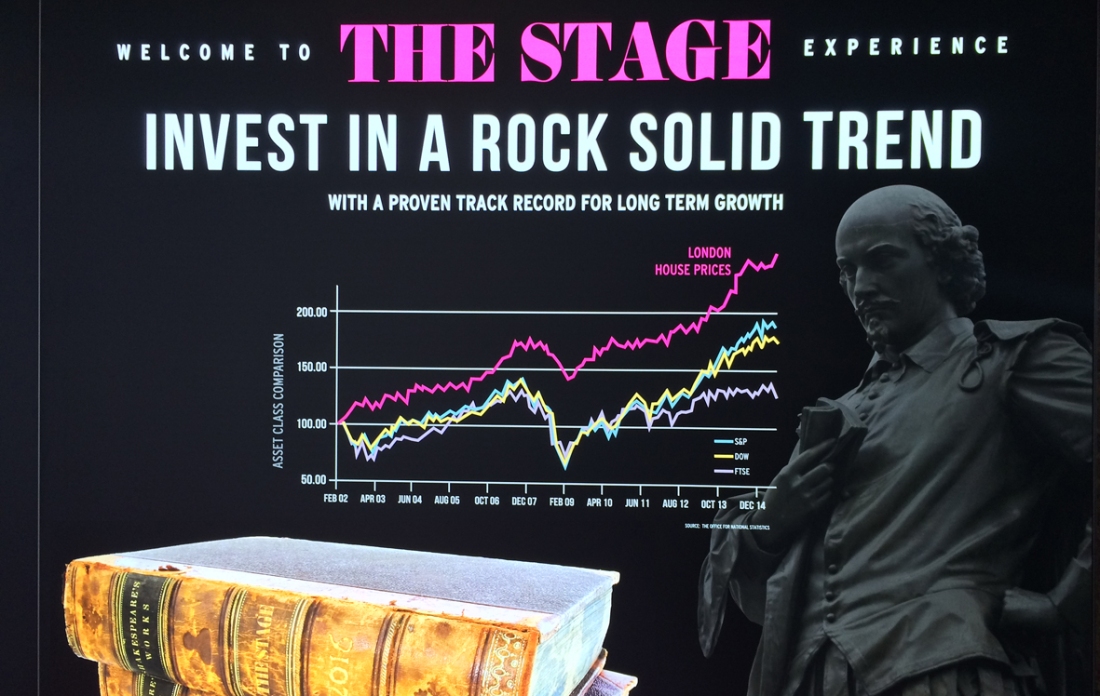 I was back in London this morning, for an interesting media event that puts some perspective on the fears some have about proposed developments across the road in Spitalfields. Here, when it’s built, will be a truly monumental tower. It’s residential. It’s on the edge of the City, but the PR focusses on artists, fashion and clubs, young entrepreneurs and street buzz and vibrancy. I doubt that many young creative types will be living there: prices for its designer suites, apartments and penthouses range from £695,000 to £2,570,000, and they are being marketed solidly at investors.

Architecturally (there are two lower-rise office and retail blocks adjacent) it puts me in mind of a compressed version of the Barbican. The flats look as if they might be really nice, with some spectacular views, at least from the highest floors. There’s some green space on the ground (in the sky too) and – here’s the most interesting bit – a theatre.

Or at least, there was a theatre.

The development is on Curtain Street, a name that goes back to The Curtain theatre, a playhouse that opened in 1577 and was probably the venue for the first performance of Henry V. That being the case, when the Chorus introduce the play, saying “…can this cockpit hold/The vasty fields of France? Or may we cram/Within this wooden O the very casques/ That did affright the air at Agincourt?” we are technically hearing a description of this very site. (The developer has said it was where Romeo and Juliet was first performed, though I understand that to have been at The Theatre, opened the year before.)

Museum of London Archaeology (MOLA) completed their desk evaluation and excavated many small test trenches a few years ago (you can see what “small” means from the photo below). Here is what Julian Bowsher wrote in his feature about London’s Shakespearean playhouses in British Archaeology (Nov/Dec 2012/127):

“A long, thin north–south evaluation trench we dug in late 2011 appears to have cut across the centre of [The Curtain playhouse]. Stone and brick foundation pads, 22m apart, almost certainly represent the outer wall footings. At the southern end of the trench, thicker brick foundations, 12ft 6in (3.8m) from the line of the outer wall, defined the inner wall. There was a brick relieving arch in this wall which may indicate the presence of an ingressus [entrance from the yard into the galleries]. A gravel yard, some 54ft (16.5m) across, lay within the inner wall. Traces of brick – and knuckle bone – surfaces between the inner and outer walls were evidence for later reuse, and may corroborate references to the building being transformed into tenements by the 1640s. Otherwise, these remains were all sealed by 18th century dumps.”

This is extraordinary. Any nearer the centre of London, instead of being preserved beneath 18th century soil and rubbish, the theatre’s remains would have been punctured, if not mostly removed, by basements and deep foundations. There is real hope here that the archaeologists might find substantial remains of a theatre known to Shakespeare – and one, ironically, about which otherwise almost nothing is known.

So far so promising. But it gets more interesting.

The Rose theatre on Bankside, built 10 years after The Curtain, was famously the subject of archaeological excavation in 1988–89. There was a heated public argument that pitched the developers of a new office block against archaeologists and public figures protesting against the remains’ imminent destruction. It was only the developers’ goodwill that saved anything. It caused such a stir that national planning policy was changed. We still benefit from that change – the policy is responsible for the fact the MOLA archaeologists were the first people to dig into the ground at The Curtain, not a bulldozer.

Galliard Homes has called the project The Stage. Its press event today was to launch MOLA’s excavation. When it’s all done, whatever remains are found will be preserved in situ and “transformed into a local landmark”, in a semi-subterranean public visitor centre. Rather as Richard III has transformed Leicester and set the city onto football glory, Shakespeare, Galliard must be hoping, will add gold and glamour to its new buildings.

This is quite fascinating. I can understand some people being cynical. However listening to Jonathan Goldstein enthuse about Shakespeare and “thousand of visitors a week”, I felt he was genuinely thinking about heritage as a positive part of development, life even, not just as a PR exercise.

So let’s see what the dig produces. I will follow it closely.

Added April 26. Here’s the plaque celebrating The Curtain, that came down with the building. Photo of latter from London Remembers, and plaque from MOLA.