I am going to illustrate some extraordinary, shocking pictures. They were drawn and painted onto what look like sheets of cotton fabric, and were apparently all owned by the Rev Arthur Samuel Huckett (1853–1922). They are hanging in Lorfords antiques warehouse near Tetbury. Few would call them decorative domestic furnishings, but they are of great historical interest, and would find a good home in an appropriate museum. Given their age and that they were painted and presumably hung in a tropical country, they are in extremely good condition. They are creased, and must have spent most of their existence carefully folded and kept in a dry, dark place. Looking at three of them now, it’s easy to imagine why that might have been. 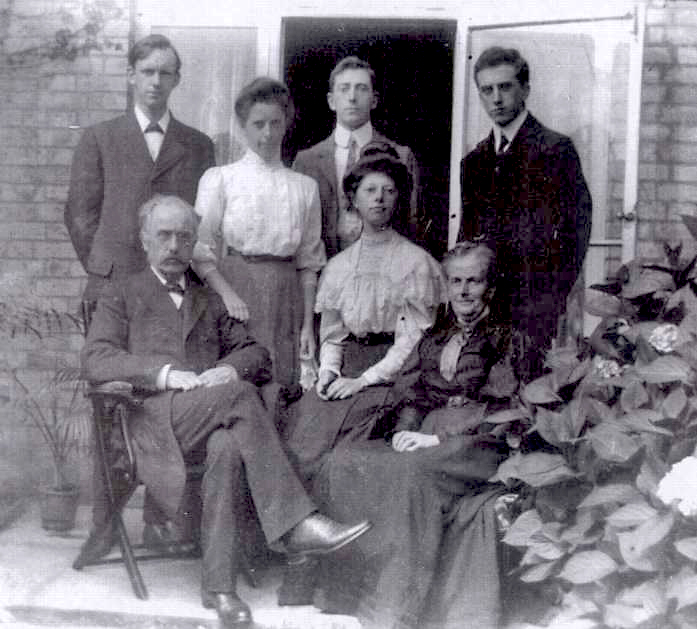 Arthur Huckett was a missionary with the London Missionary Society (LMS). He and his wife Eliza moved from London to Madagascar in 1881, shortly after marrying in their late 20s. They founded a leper colony and built schools, and remained on the island for 40 years. In the photo above (from Find A Grave – theirs is in Doncaster) Arthur is bottom left, with his wife, Eliza White (bottom right), their surviving children Winnie Eliza (centre), Edith Lily (with her husband Ernest George Jackson, top left), Alfred Edward (top centre) and Frederick William.

Find A Grave says the Hucketts went to Besilio. This suggests the LMS Betsileo Mission, in the highlands south of the capital city Antananarivo, and home to an eponymous ethnic group. Dreadful things happened there before their arrival.

The various Betsileo kingdoms were taken over by Radama I, king of the Imerina north of the Betsileo, in the early 19th century. Radama encouraged the LMS, who brought printing, schools and churches, and set up craft schools to teach things like carpentry and brick making. The LMS remained close to the all-powerful Imerina royal family, but in the 1830s Radama’s successor, Ranavalona I, tried to stop Christianity’s spread. Rightly seeing the European religion as a threat to traditional practices that underpinned Imerina society and economy (and royal power), she outlawed Christian practices, using increasingly drastic measures to enforce the ban.

Missionaries left the country. Their reports of oppression, trials by ordeal and mass execution played to a sponsoring European public. They can make doubly uncomfortable reading, at times seeming more like sensationalised fiction than accounts of real torture and abuse for which their own actions were partly to blame. But the stories were not entirely fabricated; incidents of imprisonment and murder are well documented, among them those depicted on the fabrics in Lorfords.

The three major scenes were well known and often depicted; of those I’ve seen, these are among the best drawn. They each show what the missionaries called the killing of Christian martyrs. Here is how the events were described by the Rev TT Matthews of the LMS, in his Thirty Years in Madagascar (1904), a book which delights in emphasising the “ignorance” and “the most degrading superstitions” of the island, a place of “polygamy, infanticide, trial by the poison ordeal, and all the attendant horrors of heathenism”. 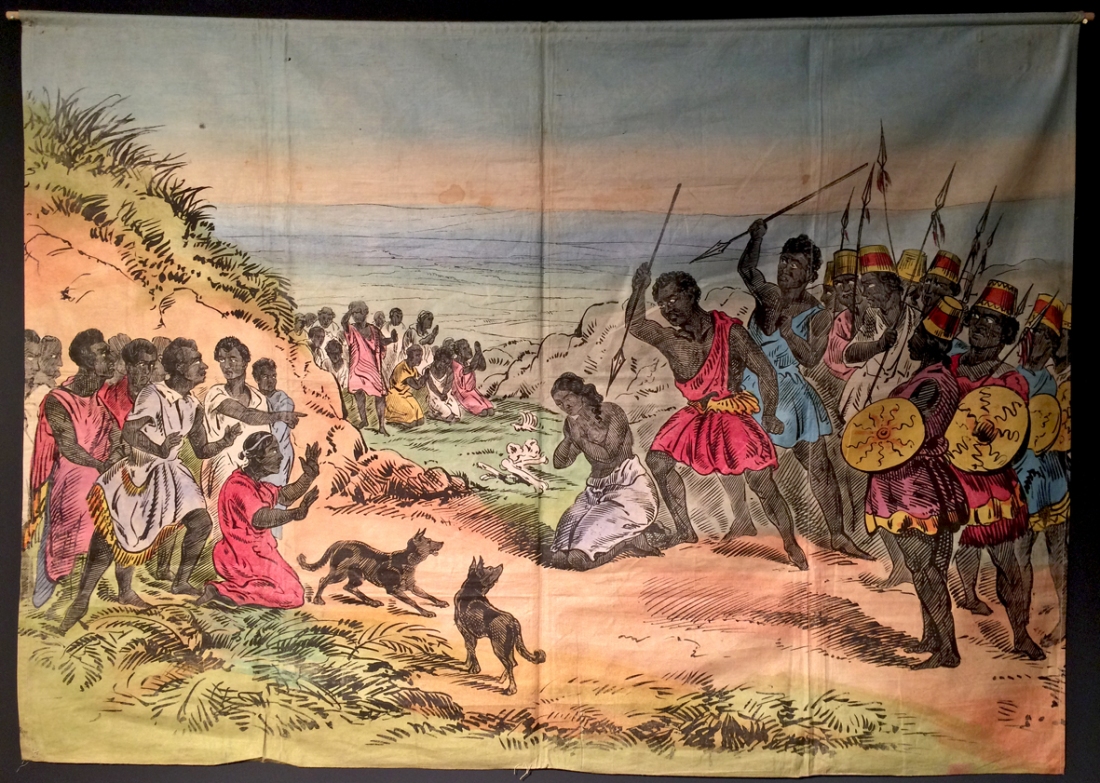 Despite Ranavalona’s ban, says Matthews, “the people continued to pray”. So the queen took revenge. The kneeling woman is Rasalama, speared to death on August 14 1837, the first Christian martyr.

On March 28 1849 (what Matthews calls “The Killing Times” lasted 26 years) 18 Christians were condemned to death. Four “nobles”, including a woman and three men, were sentenced to be burned at the stake at Faravohitra; their names were Ramitraha and Andriantsiamba, and husband and wife Andriampaniry and Ramanandalana. In the top right corner of this picture you can see a sketchy rendition of the royal palace at Tana (in the detail below I’ve removed the stake…):

The others, all from Vonizongo, were led up to a rock at Ampamarinana above the town, and thrown off (as we see in Matthews’ illustration, further down). Some accounts tell how they were lowered on ropes, one by one, and goaded to renounce their Christian God: when they failed to do so, the rope was cut. All died. 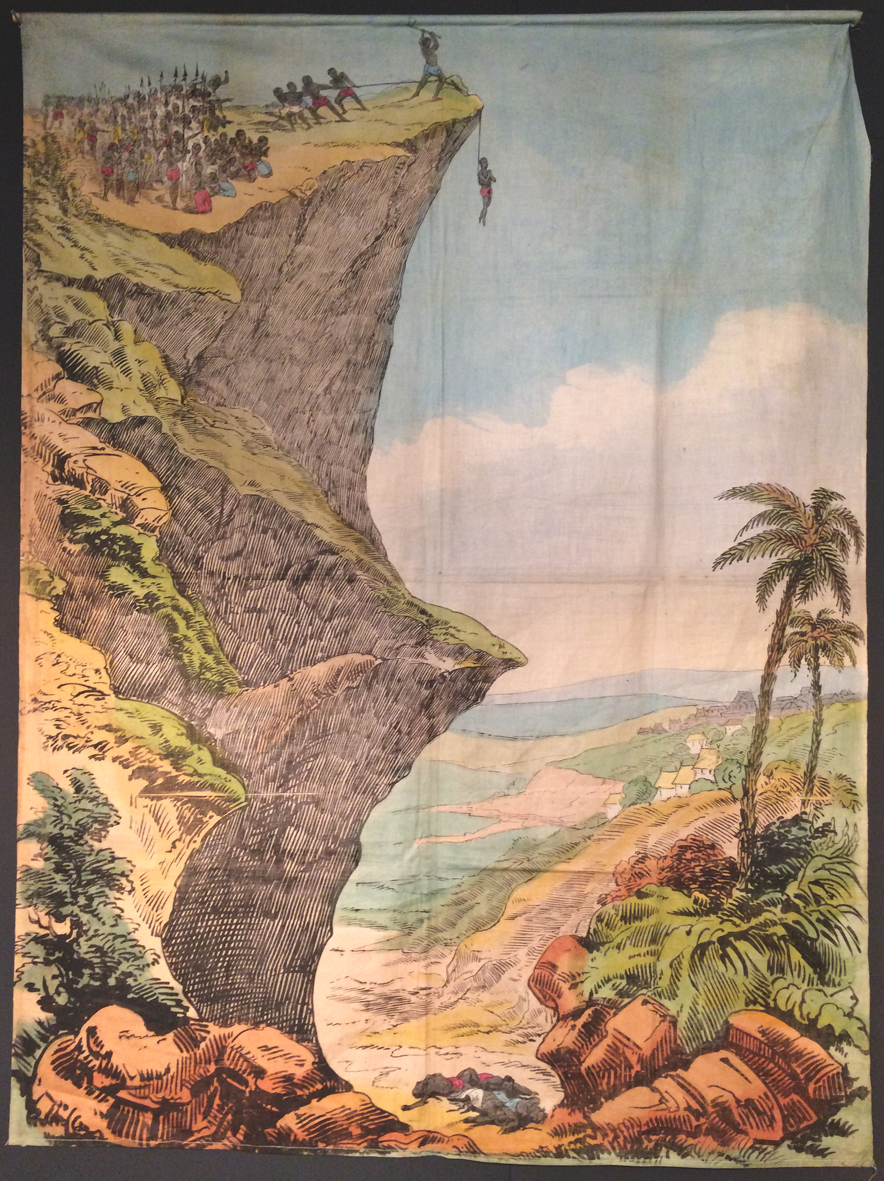 After this, Huckett’s other cloths seem trivial: a market scene and a couple of maps. These are terrible stories. Behind them lie complex, confusing events that need telling, and researching and resolving as much as is possible. Pictures such as these are part of the record and the memories. 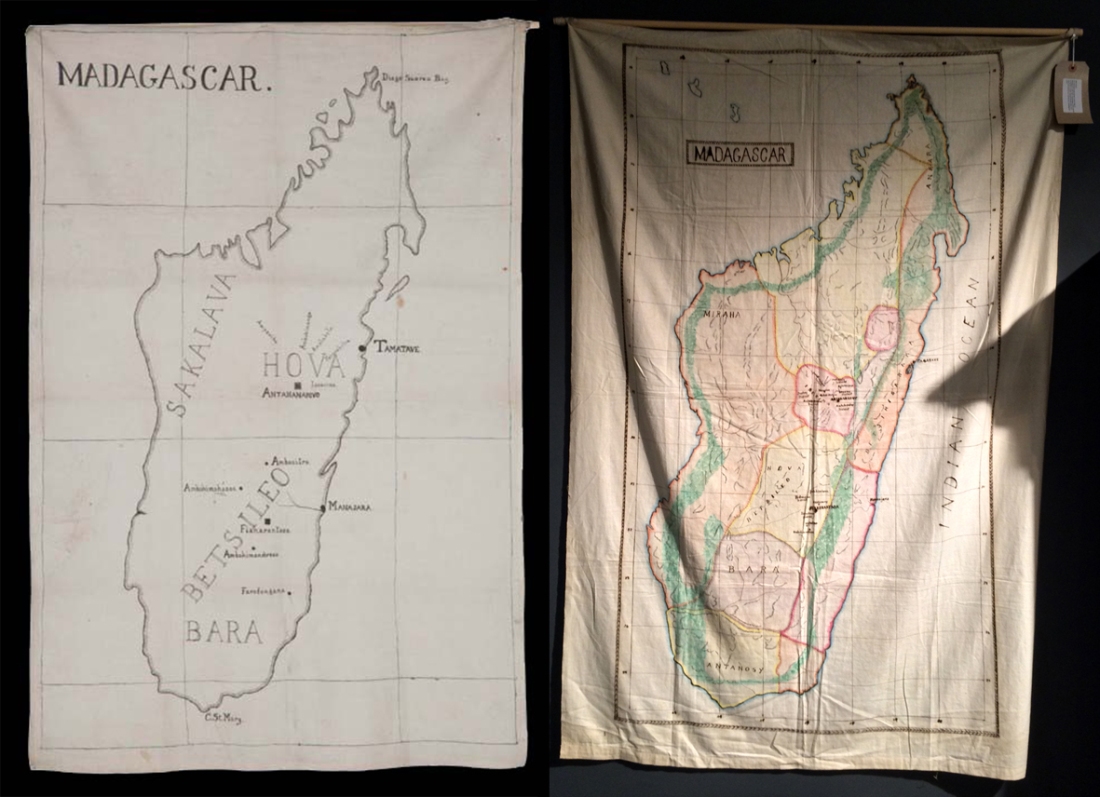 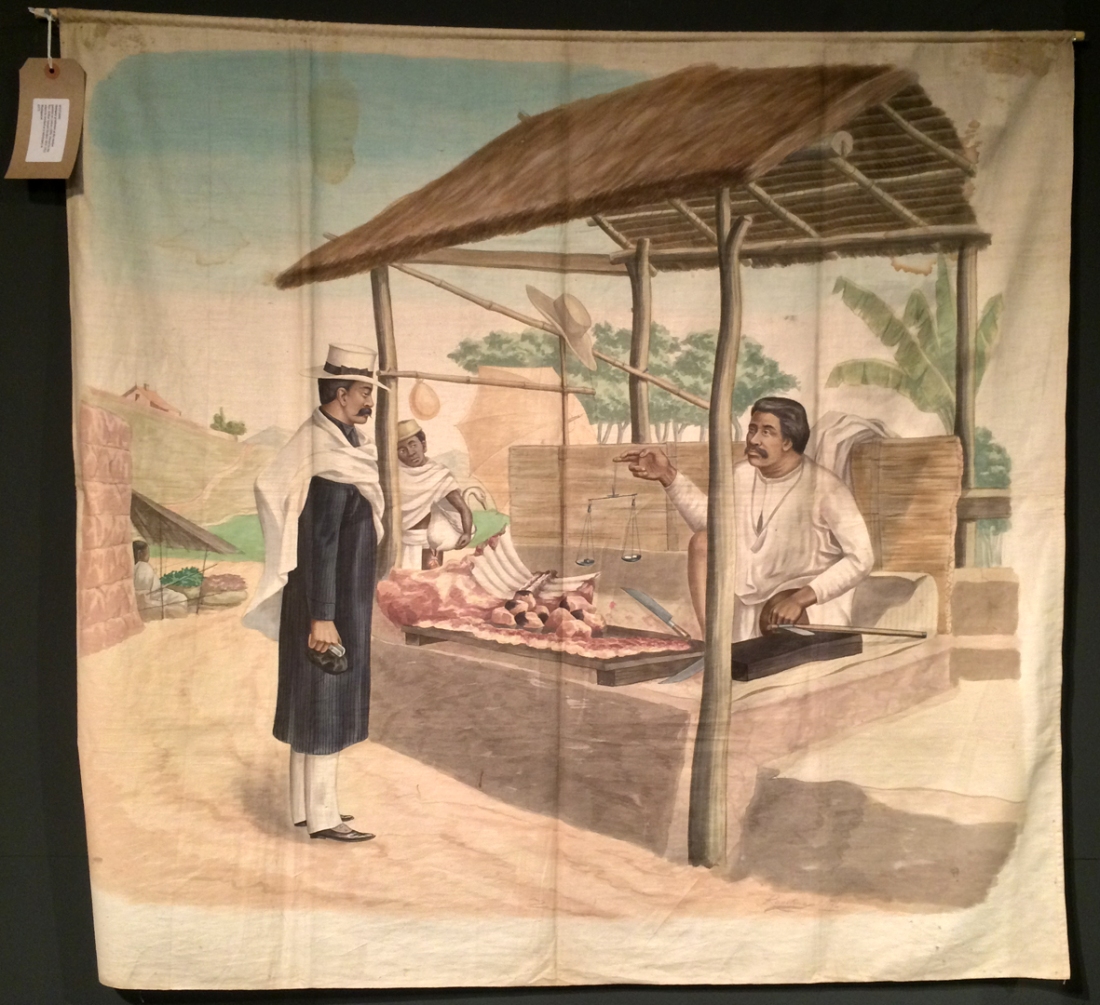