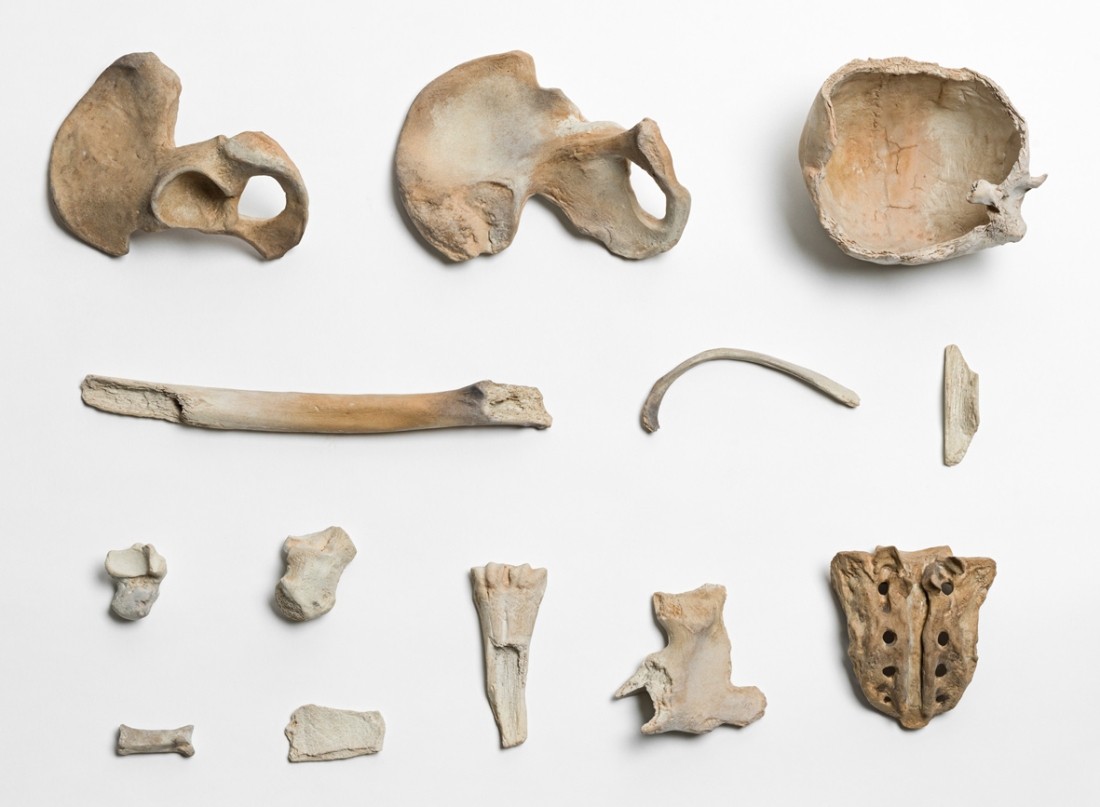 Something controversial is going to kick off, and not for the first time it involves the Chinese artist Ai Weiwei. Ai creates the most beautiful things. He is a highly literate artist, a political artist, a lover of craft and an archaeological artist. His works are at once quiet and modest, and noisily ambitious – there really seems to be nothing that he might not attempt, or imagine. Many people focus on his politics, which are indeed unavoidable. Ai Weiwei’s father, a celebrated poet called Ai Qing, was sent to a labour camp in the late 1950s with his one-year-old son. Ai Weiwei’s passport was confiscated in 2011; he constantly taunts the Chinese authorities, who watch his every move, and he speaks, writes and blogs about the injustices of his country. Yet politics do not define his art, which is complex, varied and rich with meanings and references. Eventually, what remains is the beauty, an embodiment of human spirit.

The Royal Academy is bringing Ai Weiwei to London, with what it calls a landmark exhibition, opening on September 19. There will be familiar and new works, small and very large, and things we have not yet been allowed to know about. Will he come himself? No one knows, but the RA has not rigidly denied the possibility. It’s very exciting.

There is a particular work which caught my attention at the RA press briefing on June 15, where we were showed some photos (Human Remains/2015, photo at top by Ai Weiwei). Before saying more I’m going to illustrate a few other things to put it into context.

Ai Weiwei was in London in 2010 to launch his best known project here, the hand-painted porcelain Sunflower Seeds that covered the floor of the Turbine Hall in Tate Modern. They were there into 2011, when other works could be seen across the city. Painted pots, marble doors and security cameras, perfectly made wooden boxes and more could be seen at the Lisson Gallery’s two Bell Street sites, and menacing bronze animal heads ringed the courtyard of Somerset House. Last year Blenheim Palace hosted a major display with a more domestic, intimate feel, which was also humorously subversive. Here are some of my photos.

Carving organic objects out of stone is a common Ai trick. This (above) is Monumental Junkyard (2007) in the Lisson courtyard. Also exhibited by Lisson is Moon Chest (2008, below), lovingly made from huanghuali, a precious tropical wood whose value in China has caused antique huali furniture to fetch prices akin to impressionist paintings (well, nearly so). The openings in Moon Chest are said to recreate the phases of a lunar eclipse. 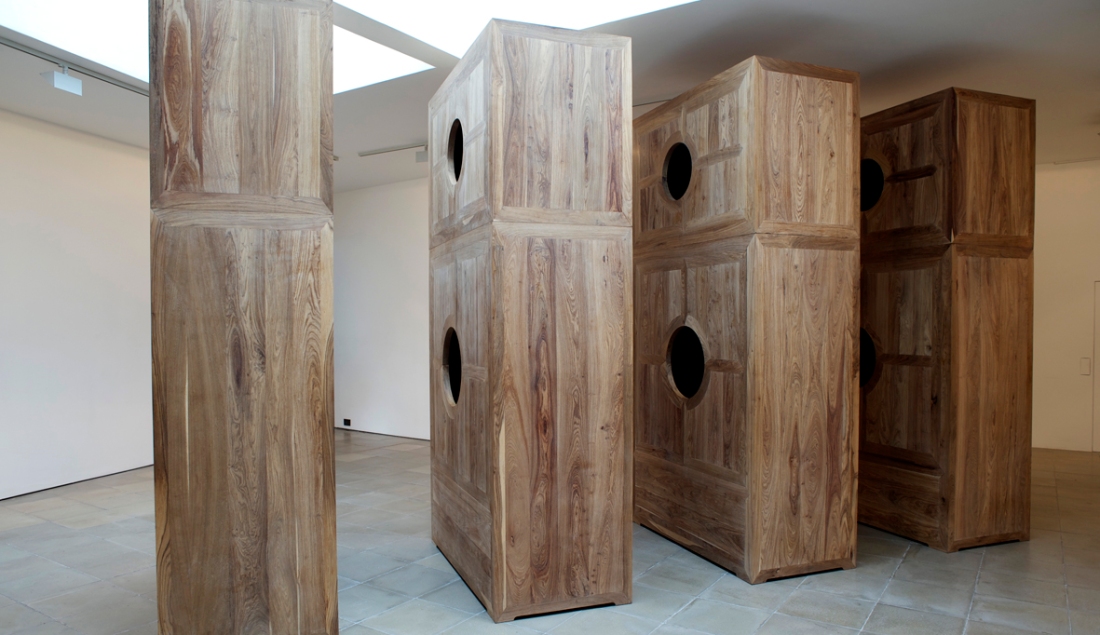 This is Bubble (2008), on the grass outside Blenheim Palace. Uncannily perfect porcelain domes reflect their surroundings. They were made in workshops which Ai has described as embodying a peak of craft and art, and that used to supply the imperial court. 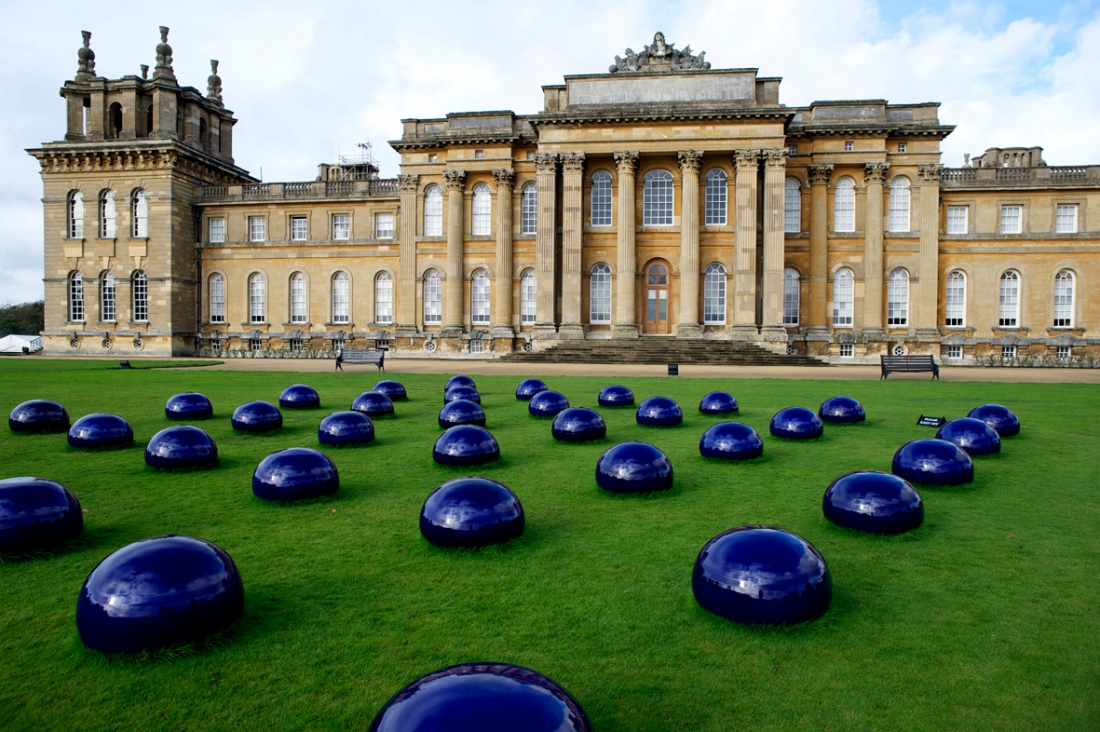 Here, on the bed where Winton Churchill is said to have been born, is a pair of giant huali-wood Handcuffs (2012). On the wall behind is Hanging Man in Porcelain (2009), a bent coat hanger framed in huali.

Behind an ostentatiously laid table in Blenheim Palace (below) stands a row of gold-plated heads, like waiters ready to meet diners’ every last demand. They represent bronzes pillaged from an 18th century imperial palace, in an episode that has Elgin-marble-like resonances in China. The palace was wrecked by British and French troops in 1850, and the garden fountain heads taken away; seven of the original 12 survive. Ai recreated an entire set in 2010, from which six large editions were cast in bronze, and six smaller editions were gold plated. In February one of the latter sold for £2.8m.

This is part of the larger version of Circle of Animals/Zodiac Heads (2010), at Somerset House.

Ai both works with traditional materials and techniques, and appropriates old artefacts, engaging head on with the place of the past in the present like no other artist. To be more specific, he smashes and paints ancient pots, and carves up antique furniture. Below is Coloured Vases (2010, in the Lisson Gallery), pots said to be neolithic that he has smothered in bright industrial paint.

In Blenheim Palace, Slanted Table (1997) was a Qing dynasty table – with its legs sawn off. Below is a series of three carefully shot stills in which Ai drops a Han urn.

This how it looks on Google images:

We all know that in the west, Ai could not get away with this. Of course it upsets many archaeologists (not least Paul Barford, who wrote that he “would like to see [Ai] arrested if that’s the only way he can be prevented from wantonly damaging ancient artefacts as a means of drawing draw [sic] attention to himself”, a statement we can diplomatically call controversial).

It confuses almost everyone. Ancient pots are already valuable, say curators and collectors. Why damage them? Then again, the Ai brush appears to remove antiquities from the grasps of the UNESCO Convention about illicit trade in cultural property, by turning what might be illegally excavated objects into contemporary art. Confusion is compounded by the possibility that the pots may not always be old, but sometimes (depending on your perspective) fakes or ingenious copies. Ai himself has spoken in general of the need to understand old technologies and crafts to create perfect imitations of traditional appearances. Confusion ate itself when an artist strode into a gallery in Miami and smashed a Han vase (or so it was said) that Ai had dipped in acrylic paint.

It might be easier, perhaps, if Ai explained what he is doing. Is he celebrating old crafts, or modern? Does an appropriated ancient funeral vase represent a historic injustice, a suppressed modern citizen, or misguided state manipulation of history – or even an incompetent state archaeological service? But offering simple explanations is not Ai’s way. The works themselves defy such an approach.

Their impact, however, as I wrote in British Archaeology (Jan/Feb 2015/140) is strong. We are at once shocked and elevated by beauty and desecration. Like a manic museum curator, Ai does things with historic artefacts we have been brought up, with good reason, to think sacrilegious. With the continuing destruction at world heritage sites by IS in Syria and Iraq, Ai’s threatening play with antiquities has a new resonance. “They never really care about culture,” Ai has said, “this is the nature of a communist, to destroy the old world to rebuild a newer one”.

Expect Coloured Vases (2015) at the Royal Academy. We have also been promised this:

Straight (2008–12) is a monument to victims of a 2008 earthquake in Sichuan. It is made from the mangled reinforcing bars Ai collected from the rubble of poorly built concrete schools. Apparently 90 tons-worth of the complete 150-ton work will be installed in Burlington House. Typically, there is a strong political statement here, where illicitly removed objects have been used to highlight bureaucratic graft and incompetence which the state had attempted to conceal. In the hands of a merely good artist the use of symbolically laden stuff can look lazy and too literal – we expect writers to lecture us, not sculptors. But in Straight, Ai seems to have created a stunningly moving and beautiful memorial that speaks beyond its immediate origins – shaming the RAF Bomber Command memorial recently installed down the road from the RA.

Which brings me, finally, to Remains (2015). I know this only from the RA-supplied photo at the top of this blog. It apparently consists of a loose collection of human bones, replicated at life size in porcelain. It has all the typical Ai ingredients: politics, controversy, fine craftsmanship and beauty. I suspect when it is revealed in September (it is a new work), the most talked about of those will be controversy.

The original remains, says the RA, were brought to Ai by people who thought he might like to use them in his art – I’m told he is regularly given things in this way. To quote the press information, the result “replicates in meticulous detail a group of bones that were recently excavated at a site of a labour camp that operated under Chairman Mao in the 1950s.” “The clandestine archaeological excavation,” continues the statement, uncovered “the remains of an unknown intellectual who perished under similar circumstances [to those in which Ai’s father was ‘re-educated’] in a labour camp.” I was told by Adrian Locke, who has co-curated the show with Tim Marlow, that the diggers found the bones before they were forced to move on from an incomplete exploration.

There’s enough in this work to stimulate a long article on its own. Archaeologists will immediately think of the intense, continuing debates about the complex ethics of variously excavating, storing, studying, reburying and returning ancient and historic human remains. These debates were brought to a public, rather narrow and sometimes comical head here, after the excavation of Richard III’s grave (see for instance Does handling of Richard III’s bones raise serious questions? and Richard III in court). They infuse all of archaeology, however, and concern us all. In Remains, Ai might have created something that both speaks for the debates, and in its beauty achieves a greater embodiment of intimate tragedy and universal humanity.

Archaeologists will also think, what actually are those bones? Unlike most art critics, I suspect, I know someone who could tell me, so I asked. Jackie McKinley (who works for Wessex Archaeology) first examined some bones for me in the late 90s, after I had found a “lost” collection of human skeletons in a basement room of the London Natural History Museum. Among the remains were those of a man excavated at Stonehenge in the 1920s. Jackie ascertained that he had been beheaded with a sword, and radiocarbon dating determined he had been Anglo-Saxon.

The bones in Remains, says Jackie, are indeed human. Or most of them: two of the smaller pieces turned out to be animal. Such is the precision of the porcelain copies, Jackie McKinley was able to identify not just their humanity, but what parts of the body they represent – and in one case, a stab at the age and sex of the individual. I’ve written her identifications onto the image below. 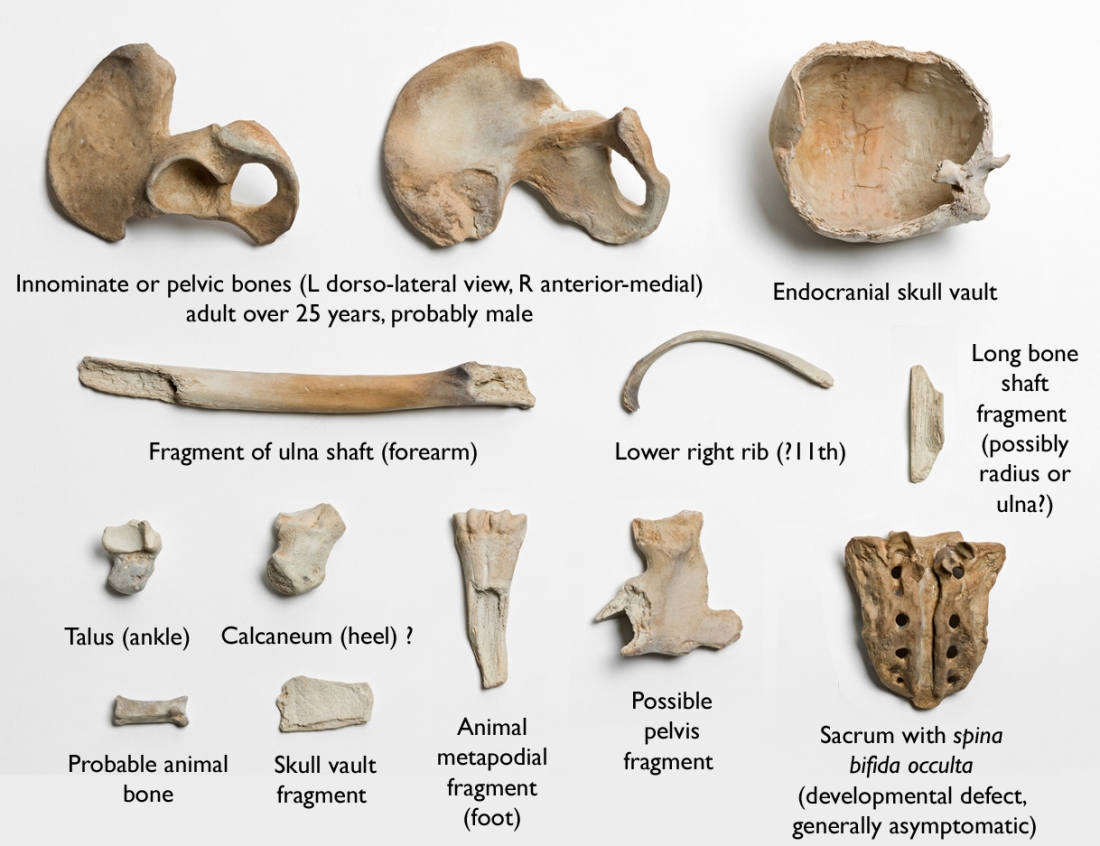 So overall the collection could have come from a single grave. If it did, that grave seems to have been dug for an adult man. Does that fit the belief of the excavators? I don’t know. I am confident, however, that the work will be one hard to forget once seen.

One thought on “Ai Weiwei: Bringing Human Remains to London”