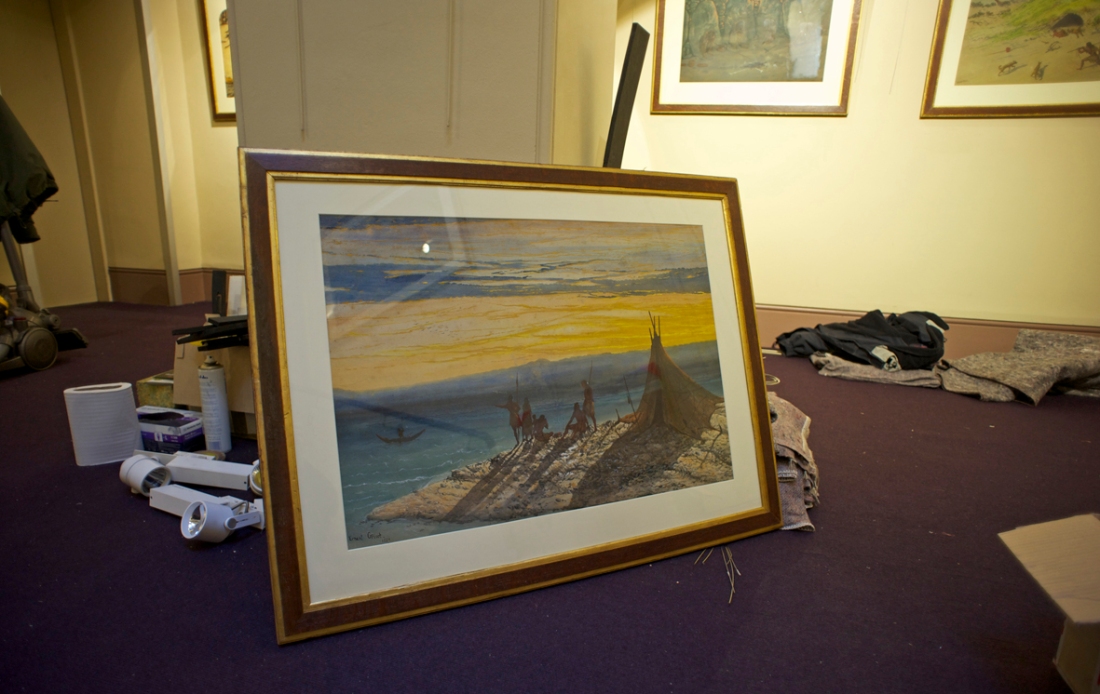 I really want you to see these paintings. Made around 1870, they’ve never been hung in public before. They are a wonderful early experiment in archaeological reconstruction illustration, are little known, and need researching – along with their creator. This is going to be a long blog, but the subject deserves it.

There are 14 of the paintings in the Quadriga Gallery in the Wellington Arch, in the exhibition The Birth of Archaeology & the Battle for the Past (until April 21). The show is about Charles Darwin, Sir John Lubbock and General Pitt-Rivers, and the 1882 Ancient Monuments Act. There are some wonderful things, including these two gems below – a slice of Silbury Hill from inside the 1849 tunnel (I like to think it was originally wrapped like a piece of wedding cake), and one of William Stukeley’s commonplace books (both loaned by Wiltshire Museum in Devizes).

But I want to write about the paintings. There are 20 in the full set, 19 scenes of prehistoric life, and a view of a tropical island. They were apparently (a word one can use a lot here) commissioned by John Lubbock around 1870 (only two are dated), and used to hang in his home-cum-museum at High Elms in Downe, Kent. They were never published. All but one are now in the care of Bromley Museum Service, some owned by the BMS, some by Eric Avebury, John Lubbock’s grandson. The one not in Kent is in Australia (according to Avebury, this was given by his sister to her friend Robert Gordon, a Sydney doctor).

Ernest Griset (1844–1907) seems to have been an extremely industrious illustrator, well known in his time but not now outside salerooms – it’s fun to write about someone who has no Wikipedia entry. Born in France, he came to London as a child, and though busy apparently died poor. There is a useful essay about him at the Look & Learn website, the British Library lists his books, and Lionel Lambourne edited a short illustrated book over 30 years ago. An article published in 1945 called “A forgotten illustrator” seems to have got it right (see end references).

This particular group of Griset paintings, however, has recently attracted interest, when Adrian Green was curator at Bromley Museum (he’s now curator of the Salisbury & South Wiltshire Museum, which has also lent material for the exhibition). Tim Murray (La Trobe University, Victoria, Australia) “discovered” the paintings for archaeologists, and Richard Milner (who among us could not warm to the man who edited Stephen Jay Gould’s column “This View of Life”?) did the same for natural scientists: Murray wrote about Lubbock and Griset, and Milner about the coral island painting, both in 2009 (see references).

Murray tracked down the Australian work, illustrated three paintings, and numbered the collection. It’s possible to correlate most of his numbers with Bromley Museum’s catalogue, so I list them here (he refers to an online feature at La Trobe, but as I write that seems to have been taken down). They are:

“Atoll” was apparently commissioned as a gift for Darwin (his first book, in 1842, was The Structure & Distribution of Coral Reefs), but never presented. Milner shows the painting (a long image in three pieces), and this detail which he suggests is HMS Beagle – the ship that took Darwin round the tip of South America and introduced him both to coral reefs, and to indigenous people whose descriptions inspired Lubbock in his thoughts about prehistoric Europe:

As for the rest, “around 1870” is a powerful date. Lubbock’s two, highly influential books about early people were published at that time: Pre-Historic Times, as Illustrated by Ancient Remains & the Manners & Customs of Modern Savages (1865), and The Origin of Civilisation & the Primitive Condition of Man: Mental & Social Condition of Savages (1870).

The titles make clear his agenda: he believed that prehistoric times could be understood through a combination of studying archaeological remains (“the unwritten records of our earliest national history”, as he described them to parliament) and modern peoples. He collected prehistoric European artefacts, and contemporary objects from around the world beyond Europe, to study and to show visitors to his home. The contemporary pieces – over a third of his collection – were what we would now call ethnographic artefacts from indigenous communities. To Lubbock these were products of ancient technologies, still alive in the skilled hands of ‘savages’, which could help him understand early Europe. In the exhibition we have some spears and clubs from Australia, the Cook Islands, the Marquesas and Cameroon: such pieces make notable appearances in Griset’s paintings.

This is what makes these works so interesting. They were done, we may imagine (and research may yet unearth documentation to prove this) under Lubbock’s instructions: they were the product of a prolific illustrator and a leading, pioneering archaeologist. We can see why that is special by looking at two examples of contemporary work where such collaboration was absent – Griset’s other illustrations, and a book published in 1870 called L’Homme Primitif, by another writer on ancient times, Louis Figuier.

Figuier occasionally notes ethnographic studies (how fire is made, for example), but his book is primarily an archaeological work, with much more detail in this area than Lubbock gave. He goes along with the case for ancient Europeans alive with now extinct animals, though he doesn’t like the idea that humans evolved from apes (variations shown by fossils, he says, can be put down to the tougher times of the ice age). It’s a book that students interested in the 19th century arguments about early humans and archaeology can read with great profit. And it’s got 30 “scenes from the life of primitive man”, by Émile Bayard. Here are four of them. 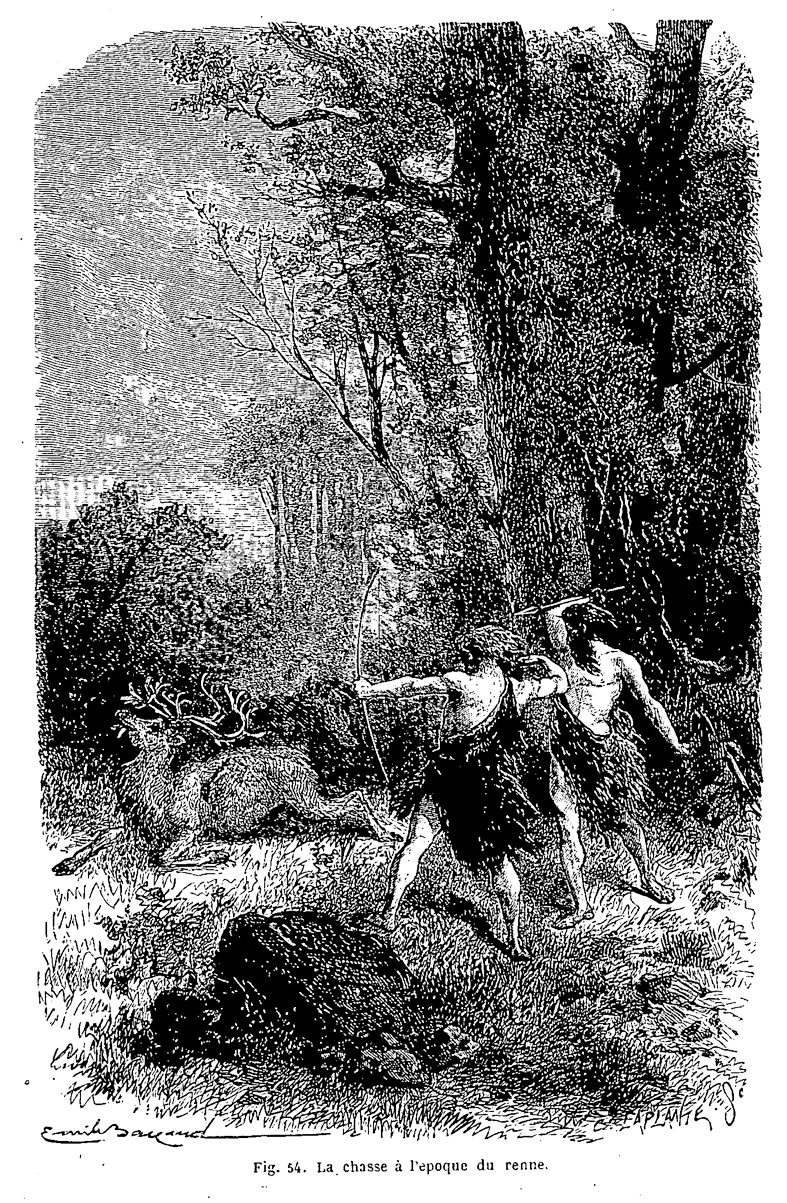 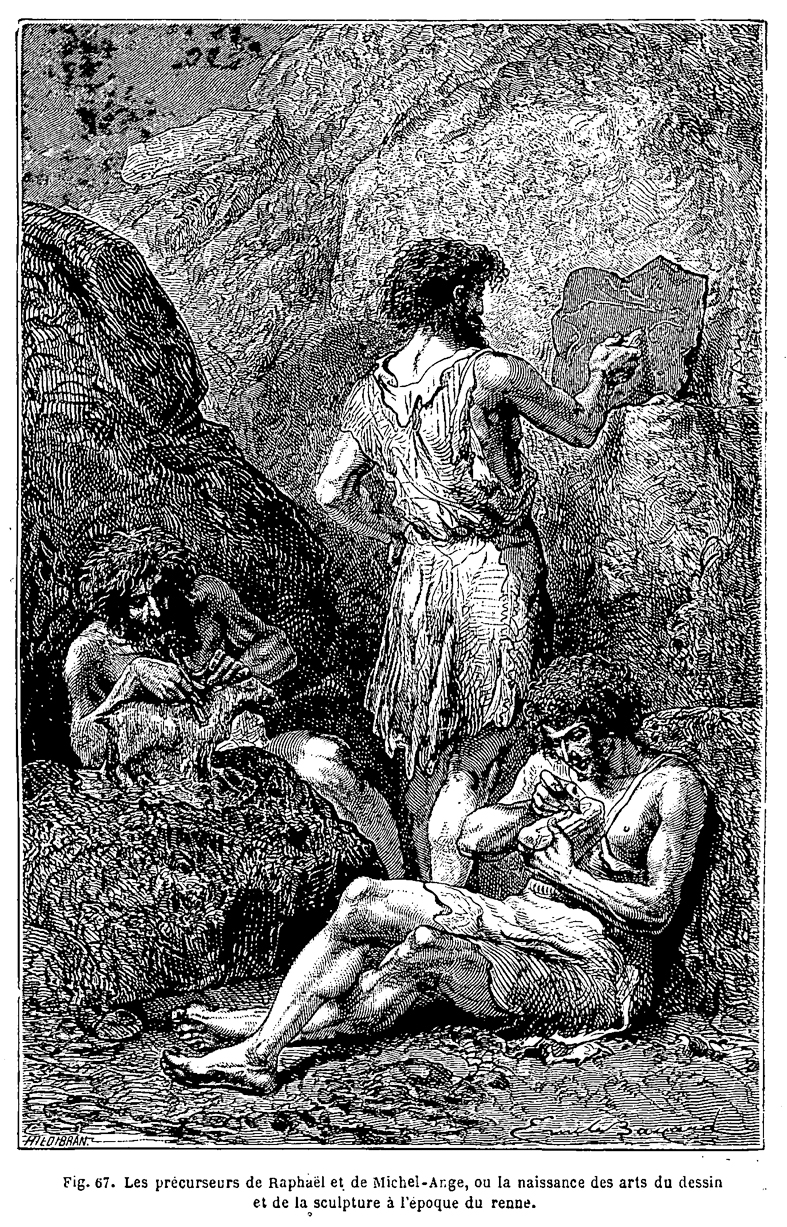 These are classic examples of how prehistoric artefacts can be put into modern hands to make them come alive. In the last, the ice age artists are not just, in Figuier’s words, “precursors of Raphael and Michelangelo”, they are Raphael and Michelangelo: their noble stance and ragged dress put them half way between a 19th century Bohemian and an ancient Greek athlete (no ape blood here). The deer hunters are straight from classical mythology. The only archaeological or ethnographic references are in the weapons, flint handaxes roughly bound to wooden handles.

Griset went to a different extreme. He excelled in caricature and quick sketch (too much realism and atmosphere risked exposing his technique), and illustrated many books. Among these was Legends of Savage Life, by James Greenwood (1869). This was a crowd-pleasing collection of stories, set in the worlds being revealed by European explorers, that had no concern with reality. In The luckless Adaphang (first image) native Patagonians had abandoned their traditional diet of seal meat, and as a consequence shrunk from giants to a fraction of an inch high. The Elk demon (second image) is a story about famine amongst native north Americans.

The gap between that Griset and Lubbock’s Griset is enormous. Equally, the latter and Figuier’s Bayard are also quite different. For Lubbock, Griset was aiming for a sense of prehistoric verisimilitude. His dominant theme is of near-naked men battling with savage beasts, including mammoth and bison, known from excavated bones to have lived in the ice age. Griset drew on ethnographic reports from around the world and other archaeological evidence from Europe, as did Lubbock in his books on evolution and society. The images show nature shaping early civilisations in the same way that Darwin’s process of natural selection lay behind the great variety of life. Early people were not noble, but struggling to survive, innocently laying the foundations for millennia of progress.

This is the painting in Australia: 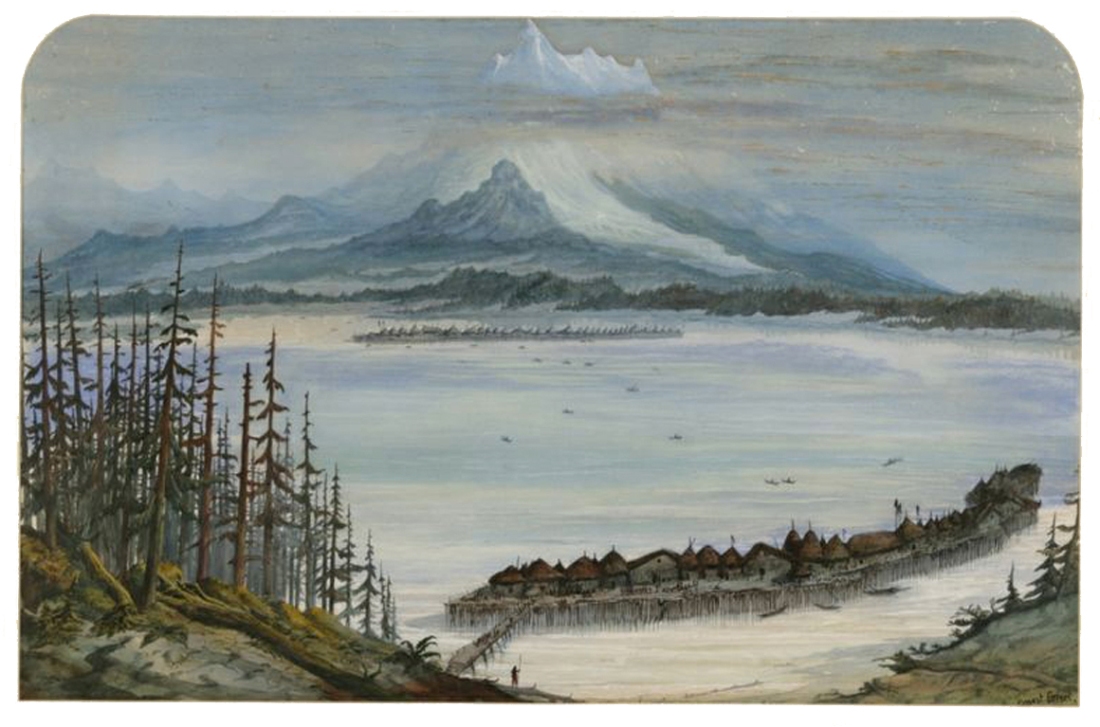 And here is a neolithic tomb. Uniquely in Griset’s series of paintings, this shows an archaeological monument rather than an episode of daily life with imagined or reconstructed houses. It is almost certainly based on the West Kennet long barrow in the Avebury world heritage site with a good view of Silbury Hill, which was bought by Lubbock in 1873. A description of excavations in the barrow published in 1868 conjured a chamber lined with six large slabs, the gaps filled with dry-stone walling, four articulated skeletons (two “apparently in a sitting position”) and stone tools and pieces of pottery; Griset shows the bodies trussed with rope, and a symbolically extinguished hearth.

Most of the paintings, however, show hunter-gatherers, especially ice age ones. And here an interesting area opens up. Thanks to Google images, we can see that the scenes Griset painted for Lubbock weren’t the only ones of their kind. And as most of these other pictures are in private hands having briefly surfaced through salerooms, at present we can know very little about them.

Here are some other Griset mammoths, not in the show, the first listed by eAntik.cz:

These two were sold in consecutive lots in Cirencester (UK) in 2008:

And most interestingly, throwing new light on the Bromley mammoths, is this. Sold in Naples, Florida, in 2008, it is apparently titled, “Strait between France & England Frozen”. This astonishing scene of dying mammoths, spear-wielding hunters and their dogs, may, perhaps, be the first depiction of an ice age world in which Britain and France were connected. 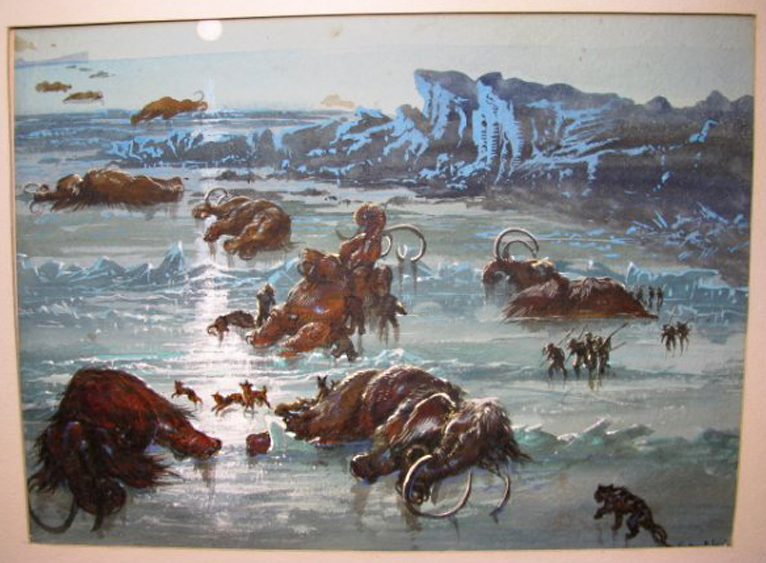 Here’s another mammoth scene in the show:

Compare the above with this, from The Story of the Earth & Man, a geological book by JW Dawson (1873). Which came first?

Another picture from the show, this time illustrating someone making a dugout canoe.

Now, when we put the exhibition together, we assumed this was an ancient scene. It may well be. But now I’ve found this, I wonder. It was sold in 2008 in Massachusetts, when it was described as “Two American Indians making a canoe”. Significantly, it’s dated, to 1876.

Griset undoubtedly did do some illustrations of north Americans, such as this, from a 1922 Smithsonian Institution Bureau of American Ethnology Bulletin, Villages of the Algonquian, Siouan, & Caddoan Tribes West of the Mississippi, by David I. Bushnell, Jr:

And he did other archaeological scenes:

And finally this, in the collection at Turton Tower, Lancashire: 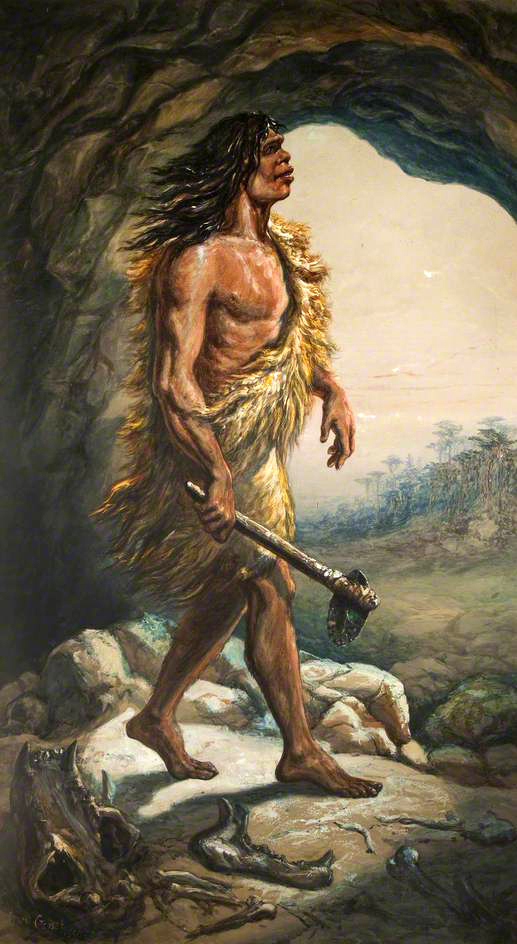 I’m quite sure this is only the tip of it all. At least we now have the unprecedented chance to see 14 of his works in one go.

“Seeing Corals with the Eye of Reason”, by Richard Milner, Natural History (Feb 2009) (Milner talks about it here – and sings)

2 thoughts on “Ernest Griset in London”