It seemed like winter when I started on the new British Archaeology, and now it’s out it feels like summer! Did it really take that long?

A recurrent theme in this issue is how archaeology today wants everyone to be part of the quest, which we have reflected on the cover – my guess is there are now more amateur archaeologists in the UK than professionals, and many are achieving great things.

This is another magazine to read from front to back, with much topical and thought-provoking stuff. That includes what I suspect is British Archaeology’s first excursion into Egypt, with Heinrich Härke’s eyewitness account of events in Cairo as the revolution began in late January, a diary of incidents affecting the Egyptian Museum and ancient sites, and Hany Hanna’s message to Zahi Hawass asking that alleged corruption be swept from the world of Egyptian archaeology. I hope that such international features will become more common in future issues. 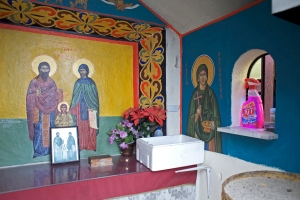 There is also a feature about the archaeological quest for ancient Greek royalty: one of the stories behind the new must-see exhibition in the Ashmolean Museum. I was lucky enough to see the museum and ruins at Vergina, near Thessaloniki in northern Greece (photo above is a shrine in the village), with a small group of archaeologists and journalists organised by the Ashmolean. Coming from barbarian Britain, I found it fascinating to see so much literary and archaeological data in Greece for a time that remains largely, in my eyes, prehistoric – such is the partisan and very selective nature of the texts. How to make the most of both?

The exhibition is called “Heracles to Alexander the Great”, but strictly neither of those characters is in the show (if it’s about individuals, it’s more about Alexander’s father and children). But the reality is that the archaeology, so much of it new, is so much less known than the history, that “Aristocratic tombs in Vergina” would have meant little to anybody. A great deal of what we know about the archaeology is due to Angeliki Kottaridi, director of the 17th Ephorate of Prehistoric and Classical Antiquities and a force of nature in the exhibition, who is seen below at the entrance to the subterranean museum at Vergina (where archaeologists entirely removed the burial mound, and replaced it once the museum was built!).

On the way home we were shown round the new(ish) Acropolis Museum, which was a real treat. The best I can say about this is that is has some very nice parts. The light on the high floor with the Parthenon marbles is lovely, as is the view from there across to the Acropolis. The café too I liked, reminding me in its décor and layout a little of the café at Tate Modern in London and its view across the river to the city and St Paul’s. It’s interesting to see in situ archaeological excavations play such a prominent part in a museum (though this does raise questions about how the archaeology could have been properly investigated: how were decisions taken about when to stop digging and to preserve?). I liked the Archaic Gallery, with its statues parading among the modern concrete columns, with something of the magical feel of what might happen at night when a museum store comes to life. (The photos below shows Dimitrios Pandermalis, Acropolis Museum president and professor of archaeology at the Aristotle University of Thessaloniki, with Christopher Brown, director of the Ashmolean Museum, above the Archaic Gallery; and the outside approach over excavations being tidied up for display.) 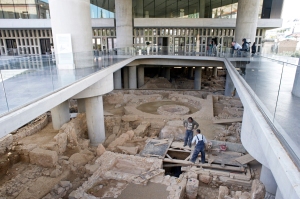 But these are fragments, and overall the building seems to reflect its birth midst disputes about its design, location, surrounding buildings, delays, problems with the underlying archaeology and so on. It lacks a clear unified vision; it argues and competes loudly but not informatively with the Acropolis, while walling itself off from the neighbourhood; the concrete pillars speak multi-story car park more than classical sensitivity; and while the wide entrance ramp and steps are entrancing, circulation around the museum as a whole seems almost random. And nothing to do with the design, but the video of a conservator burning grime, and whatever else was beneath, to reveal a pristine caryatid from the Erechtheion (we would have been able to see it happening live, but the conservators were on strike) was terrifying.

I remember the reported fuss about the nearby art deco building that was or was not to be demolished, and to my surprise found myself feeling glad the building was where it still is: at least it contributes a needed separation between the museum and the Acropolis, so that the former has an element of being part of the town rather than part of the latter. But amongst my party I may have been on my own in this.