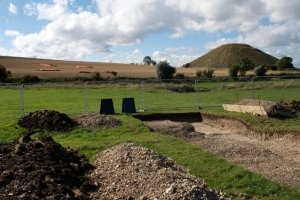 There are now some good films about Silbury Hill itself on the web.

Four short videos (total 35 minutes) about the recent conservation work, including a fabulous tour of the section exposed inside the tunnel with Jim Leary – every excavation should have records like that.

Fachtna McAvoy has put a video on YouTube that is a longer version of the first of these films made for English Heritage by Chris Corden.

The Chronicle film made by David Collison and Paul Johnstone of the BBC-sponsored dig.

Field recordings made by Dave Prentice (Nusphere) of summer solstice celebrations on Silbury Hill and in the henge at Avebury.